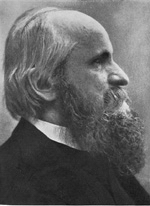 Alexius von Meinong (1853-1920) was an Austrian philosopher and psychologist belonging to the school of psychology of the act.

He is mainly known for his Theory of Objects  (Gegenstandstheorie, 1904) and his studies of deontological logic, based on his belief in non-existent (“totally abstract”) objects. This theory is based on the fact that it is possible to think of an object, such as a mountain of gold, even though such an object does not exist in the external world.

Alexius Meinong (July 17, 1853 – Graz, Austria, November 27, 1920). was born to a noble German family in Lemberg, which was part of Austria and later became part of Poland. Today it is called Leopolis and is in Ukraine.

After attending the Academic Gymnasium in Vienna, he studied history and philosophy at the University of Vienna under Franz Brentano (1875 – 1878)

In 1878, he transferred to the Karl Franzens University in Graz as Riedl’s successor; there he became an extraordinary professor of philosophy (1882).

Meinong supervised the graduation thesis of Christian von Ehrenfels (founder of Gestalt theory and Gestalt psychology). He was also the supervisor of the qualifications of Alois Höfler and Anton Ölzen-Newin.

Besides the influence of his master Brentano, he was strongly influenced by the phenomenology created by his fellow student Edmund Husserl. It is for this reason that Meinong tries the creation of a new science that tries the study of the previous to the experience (the a priori) subtracting for this task the intentionality of the very subjective context to which Husserl’s phenomenology had arrived.

He considers that “nonexistent objects” are a priori and nevertheless promoters of intentionality and, for this reason, like existing objects, constituents of consciousness, Meinong is far from falling into solipsism, but studies the configuration – in consciousness – of such nonexistent entities based on real objectivity.