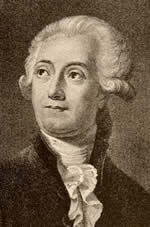 – In any chemical reaction, mass is conserved: Matter is neither created nor destroyed; only the form of the matter is altered.

– Precise measurements of the weights and volumes of substances involved in experiments must be made if the researcher hopes to explain the nature of the reactions.

– Precision and uniformity in nomenclature is necessary for a precise science of chemistry.

– Combustion proceeds by the combination of oxygen with a combustible material; animal respiration is a form of combustion.

– One of the goals of chemistry is to compile a list of the elements, which are undecomposable materials.

The son of a wealthy Parisian lawyer, Antoine-Laurent Lavoisier completed a law degree in accordance with family wishes. His real interest, however was in science, which he pursued with passion while leading a full public life. On the basis of his earliest scientific work, mostly in geology, he was elected in 1768, at the early age of 25, to the Academy of Sciences, France’s most elite scientific society.

In the same year he bought into the Ferme Générale, the private corporation that collected taxes for the Crown on a profit-and-loss basis. A few years later he married the daughter of another tax farmer, Marie-Anne Pierrette Paulze, who was not quite fourteen at the time. Madame Lavoisier prepared herself to be her husband’s scientific collaborator by learning English to translate the work of British chemists like Joseph Priestley and by studying art and engraving to illustrate Antoine-Laurent’s scientific experiments.

In 1775, Lavoisier was appointed a commissioner of the Royal Gunpowder and Saltpeter Administration and took up residence in the Paris Arsenal. There he equipped a fine laboratory, which attracted young chemists from all over Europe to learn about the “Chemical Revolution” then in progress. He meanwhile succeeded in producing more and better gunpowder by increasing the supply and ensuring the purity of the constituents—saltpeter (sodium nitrate), sulfur, and charcoal—as well as by improving the methods of granulating the powder.

Characteristic of Lavoisier’s chemistry was his systematic determination of the weights of reagents and products involved in chemical reactions, including the gaseous components, and his underlying belief that matter—identified by weight—would be conserved through any reaction. Among his contributions to chemistry associated with this method were the understanding of combustion and respiration as caused by chemical reactions with the part of the air he called “oxygen”, and his definitive proof by composition and decomposition that water is made up of oxygen and hydrogen. His giving new names to of which are still used today—was an important means of forwarding the Chemical Revolution, because these terms expressed the theory behind them.

In the case of “oxygen”, from the Greek meaning “acid-former”, Lavoisier expressed his theory that oxygen was the acidifying principle. He considered thirty-three substances as “elements”—by his definition, substances that chemical analyses had failed to break down into simpler entities. Ironically, considering his opposition to phlogiston, among these substances was “caloric”—the unweighable substance of heat, and possibly light, that caused other substances to expand when it was added to them. To propagate his ideas, in 1789 he published a textbook, Traité élémentaire de chimie, and began a journal, Annales de Chimie, which carried research reports about the new chemistry almost exclusively.

A political and social liberal, Lavoisier took an active part in the events leading to the French Revolution, and in its early years he drew up plans and reports advocating many reforms, including the establishment of the metric system of weights and measures. Despite his eminence and his services to science and France, he came under attack as a former farmer-general of taxes and was guillotined in 1794. A noted mathematician, Joseph-Louis Lagrange, remarked of this event, “It took them only an instant to cut off that head, and a hundred years may not produce another like it.”