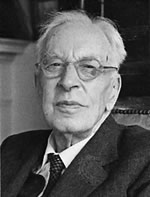 – The proper study of history involves studying civilizations rather than nations or cultural periods.

– Civilizations arise by the response of creative individuals to challenges presented by situations of special difficulty.

– Progress in civilization consists in meeting difficulties by responding in creative ways that are internal and spiritual rather than external and material.

– The breakdown of society occurs when creative individuals fail to lead through the exercise of creative power, resulting in withdrawal of the allegiance of the majority and a subsequent loss of social unity.

British historian whose twelve-volume analysis of the rise and fall of civilizations, A Study of History, 1934-1961, (also known as History of the World) was very popular in its time.

Toynbee, a prolific author, was the nephew of a great economic historian, Arnold Toynbee, with whom he is sometimes confused. Born in London, Arnold Joseph was educated at Winchester College and Balliol College, Oxford. He worked for the Foreign Office during both World War I and World War II. He was Director of Studies at the Royal Institute of International Affairs (1925-1955) and Research Professor of International History at the University of London.

Toynbee was interested in the seeming repetition of patterns in history and, later, in the origins of civilisation. It was in this context that he read Spengler’s Decline of the West and although there is some superficial similarity, both men describe the rise, flowering and decline of civilisations, their work moved in different directions.

Toynbee agreed with Spengler that there were strong parallels between their situation in Europe and the ancient Greco-Roman civilization. Toynbee saw his own views as being more scientific and empirical than Spengler’s, he described himself as a “metahistorian” whose “intelligible field of study” was civilization.

In his Study of History Toynbee describes the rise and decline of 23 civilisations. His over-arching analysis was the place of moral and religious challenge, and response to such challenge, as the reason for the robustness or decline of a civilisation. He described parallel life cycles of growth, dissolution, a “time of troubles,” a universal state, and a final collapse leading to a new genesis. Although he found the uniformity of the patterns, particularly of disintegration, sufficiently regular to reduce to graphs, and even though he formulated definite laws of development such as “challenge and response,” Toynbee insisted that the cyclical pattern could, and should, be broken.

Toynbee’s books, huge in scale, achieved wide prominence but he was more admired by the History reading public than by fellow historians, who criticised him for contorting information to fit his alleged patterns of history.

The ideas he promoted had some vogue (Toynbee actually appeared on the Cover of Time magazine in 1947). They have not however proved to be of decisive influence on other historians. Toynbee’s work was subject to an effective critique by Pieter Geyl and an article written by Hugh Trevor-Roper, “Arnold Toynbee’s Millenium” – descibing Toynbee’s work as a “Philosophy of Mish-Mash” – dramatically undermined Toynbee’s reputation.