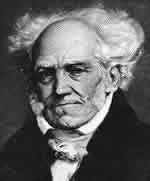 – The world is nothing but the product of our perception and reason and exists only through and for the perceiving subject.

– Reality is in itself nothing but will (an aimless energy), and will is known only as idea (representation), the objectivity of the will.

– The body is the will objectified.

– The arts objectify the will by representing individual things and therefore the Platonic Ideas.

– The will we know is the will-to-live, and ti live is to desire, and to desire is to suffer.

– The way to salvation, to escape from suffering, is through knowledge of the nature of will, a knowledge that prompts denial of the will.

Arthur Schopenhauer was born on February 22 1788 in Danzig then a “Free City” largely established by Germanic traders, now – Gdansk, Poland. When Prussia took Danzig over in 1793, his father, a successful and liberal-minded merchant, moved the family to Hamburg.

Following on from this period of formal education he relied on his inherited income to finance a period of private contemplation, study and philosophy writing. From 1814 to 1818 he lived in Dresden where his principal work, The World as Will and Representation, which is also known as The World as Will and Idea, was written. In 1819 it was published – to meet with very little in the way of public acclaim.

After an unsuccessful period of lectureship in Berlin prior to 1831 he settled in Frankfurt am Main, where he led a solitary life and became deeply involved in the study of Buddhist and Hindu philosophies and mysticism where he seems to have found echoes of the approach to philosophy that he was independently working on.

He was also influenced by the ideas of the German Dominican theologian, mystic, and eclectic philosopher Meister Eckhart, the German theosophist and mystic Jakob Boehme, and the scholars of the Renaissance and the Enlightenment.

Schopenhauer had suffered a great disappointment circa 1820 as his publication of The World as Will and Idea had fallen flat in terms of a public response. A second edition published, in two volumes, some twenty five years later did not fare much better. This 1844 edition was remarkable in that the first volume was effectively the work of 1819 whilst the second, and larger, volume was a book of commentary.

In the intervening years he had written several works including On the Will in Nature (1836), The Freedom of the Will (1841), and The Foundations of Morality (1841).

Although an Essay on the Freedom of the Will had been recognised through the awardance of a cultural prize in Norway in 1839 he was into his sixties when the publication of his collection of essays Parerga and Paralipomena (i.e. Additions and Omissions – 1851) really brought public attention to his life’s work.

Arthur Schopenhauer was seventy-two years of age, and internationally famous, at the time of his death on September 21 1860.