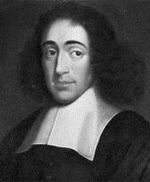 – There can be only one infinite, dovone substance, comprising all of reality.

– Infinite substance must have an infinity of attributes.

– God and nature (understood as substance) are identical inasmuch as God is infinite.

– Substance is self-caused and depends on nothing other than itself, whether for its existence or for its differentiation into various models.

– What we perceive to be a world consisting of numerous and different finite creatures is actually the whole of God or Nature in its attribute of extension.

– Since thought and extension are attributes of the one substance, the problem of dualism is overcome.

– Philosophy and religion are distinct and separate approaches to the divine, the former dealing with rational truths about God, the latter with obedience and worship.

– The problem with religion and theology is that they confuse their approach to God with rational truth and turn from piety to dogmatism and superstition.

– Freedom of judgment and freedom of inward piety are inalienable rights of human beings.

– The just exercise of sovereign power by a contractually or coveantally constituted government is suitable to the preservation of liberty in religious as well as civil matters.

Born in Amsterdam to Sephardic Jews, he gained fame for his positions of pantheism and neutral monism, as well as the fact that his Ethics was written in the form of postulates and definitions, as though it were a geometry treatise. In the summer of 1656, he was excommunicated from the Jewish community for his claims that God is the mechanism of nature and the universe, and the Bible is a metaphorical and allegorical work used to teach the nature of God, both of which were based on a form of Cartesianism (see Rene Descartes). Following his excommunication, he adopted the first name Benedictus (the Latin equivalent of his given name, Baruch).

Since the public reactions to the anonymously published Theologico-Political Treatise turned unfavourable to his brand of Cartesianism, he abstained from publishing more of his works. The Ethics was published after his death, in the Opera postuma edited by his friends.

Some of the major figures whom Spinoza met include Henry Oldenburg and Leibniz.

Known as both the “Greatest Jew” and the “Greatest Atheist”, Spinoza contended that “God” and “Nature” were two names for the same reality, namely the single substance (meaning “to stand beneath” rather than “matter”) that underlies the universe and of which all lesser “entities” are actually modes or modifications. He contended that “Deus sive Natura” (“God or Nature”) was a being of infinitely many attributes, of which extension and thought were two. His account of the nature of reality, then, seems to treat the physical and mental worlds as two different, parallel “subworlds” that neither overlap nor interact. This formulation is a historically significant panpsychist solution to the mind-body problem known as neutral monism.

Spinoza was a thoroughgoing determinist who held that absolutely everything that happens occurs through the operation of necessity. For him, even human behaviour is fully determined, freedom being our capacity to know we are determined and to understand why we act as we do. So freedom is not the possibility to say “no” to what happens to us but the possibility to say “yes” and fully understand why things should necessarily happen that way.

Spinoza’s philosophy has much in common with Stoicism, but he differed sharply from the Stoics in one important respect: he utterly rejected their contention that reason could defeat emotion. On the contrary, he contended, an emotion can be displaced or overcome only by a stronger emotion. For him, the crucial distinction was between active and passive emotions, the former being those that are rationally understood and the latter those that are not. He also held that knowledge of true causes of passive emotion can transform it to an active emotion, thus anticipating one of the key ideas of Sigmund Freud’s psychoanalysis.

– A Theological-Political Treatise, 1670
– Ethics Demonstrated According to the Geometrical Order, 1677
– Hebrew Grammar, 1677
– On the Improvement of the Understanding, 1662
– Short Treatise on God, Man and His Well-Being, 1660s
– Principles of Cartesian Philosophy, 1663
– Thoughts on Metaphysics, 1663

Quotes from Baruch (or Benedict) Spinoza

– “Government which attempts to control minds is accounted tyrannical, and it is considered an abuse of sovereignty and a usurpation of the rights of subjects to seek to prescribe what shall be accepted as true, or rejected as false, or what opinions should actuate men in their worship of God. All these questions fall within a man’s natural right, which he cannot abdicate even with his own consent.” (from “Tractatus Theologico-Politicus”, 1670)

– “The object of government is not to change men from rational beings into beasts or puppets, but no enable them to develop their minds and bodies in security, and to employ their reason unshackled; neither showing hatred, anger or deceit, nor watched with the eyes of jealously and injustice. In fact, the true aim of government is liberty.” (from “Tractatus Theologico-Politicus”, 1670)

– “The knowledge and love of God is the ultimate aim to which all our actions should be directed.” (from “Tractatus Theologico-Politicus”, 1670)

– “Simplicity and truth of character are not produced by the constraint of laws, nor by the authority of the state; no one the whole world over can be forced or legislated into a state of blessedness; the means required for such a consummation are faithful and brotherly admonition, sound education, and, above all, free use of the individual judgment.” (from “Tractatus Theologico-Politicus”, 1670)

– “Superstition … is engendered, preserved, and fostered by fear.” (from “Tractatus Theologico-Politicus”, 1670)

– “An emotion can only be restrained by an emotion stranger than and contrary to itself.” (from “Ethics”, 1677)

– “Hatred is increased by being reciprocated and can, on the other hand, be destroyed by love.” (from “Ethics”, 1677)

– “Men who are governed by reason … desire for themselves nothing which they do not also desire for the rest of mankind, and, consequently, are just, faithful, and honorable in their conduct.” (from “Ethics”, 1677)

– “Under the guidance of reason we should pursue the greater of two goods and the lesser of two evils.” (from “Ethics”, 1677)

– “Virtue is nothing else but action in accordance with the laws of one’s own nature.” (from “Ethics”, 1677)

– “What Paul says about Peter tells us more about Paul than about Peter.” (from “Psychoanalysis and Religion” by Erich Fromm)