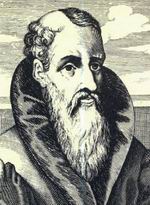 – True happiness is found in pursuit of the highest good, which is God.

– Temporal possessions, honor, fame, pleasure and power are inadequate and disappointing goals; only the happiness that comes from loving God cannot be taken away by misfortune.

– Even though God foresees the free acts of the human will, freedom of choice remains, for God sees all times concurrently and through eternity.

Anicius Manlius Severinus Boethius was born in or near Rome around the year 480 A.D. Orphaned young, he was brought up in the household of one of the richest and most venerable aristocrats of the time, Symmachus. He married Symmachus’s daughter and pursued a typical career for a senatorial scion of the time, alternating between ceremonial public office and private leisure.

In two ways, however, Boethius was unique. He was far and away the best educated Roman of his age: indeed, there had been no one like him for a century, and there would never be another (the senate, long since ceremoniously inane, disappeared forever by the end of the sixth century). He had a command of the Greek language adequate to make him a student, translator, and commentator of the Platonic philosophies of his age (to which we give the name neo-Platonism, to distinguish their opinions from the original doctrines of Plato himself).

Boethius may in fact have studied in the Greek east, perhaps at Athens, perhaps at Alexandria, but we cannot be sure. At any rate, he undertook an ambitious project of translating and interpreting all the works of both Plato and Aristotle and then – he opined – demonstrating the essential agreement of the two. Only a few pieces of this large undertaking were completed before Boethius’s life was cut short.

For the other unique facet of Boethius’s character was that he took public affairs so seriously that he lost his life at the hands of an authoritarian monarch: such complete devotion to the public weal had long since faded from aristocratic fashion. Little is to be made of his term as consul in 510, or of his doting presence at the consular celebrations of 522 when his two sons held the office simultaneously. But in the early 520’s, he served as magister officiorum in the half-Roman regime of the Ostrogothic king Theoderic. Theoderic had taken Italy at the behest of the emperors in Constantinople; but political and theological fashions had changed in the thirty years since Theoderic entered Italy. In the reign of the emperor Justin (519-527), the aging Theoderic fell out with Constantinople; somehow, in ways that remain hotly controversial, Boethius came to be suspected by his monarch of disloyal sympathies; the suspicion may indeed have been well-placed, but the sympathies may have been well-grounded.

In 525 Boethius was executed. His father-in-law Symmachus went to the block not long after. When Theoderic died in August 526, legend quickly but implausibly had it that he was haunted at the end by his crimes.

The philosophical works of Boethius have been identified as the most influential bridge between classic and medieval philosophy. His translations of Aristotle’s logic are single handedly responsible for their survival. Boethius also wrote treatises on the liberal arts that were used extensively in the creation of medieval education. It is his last and most influential work, the Consolation of Philosophy, which has left the most lasting mark on philosophy. Through this work, Boethius discusses both theological as well as philosophical issues. Though it is Platonic in origin, it draws form Aristotelian and Stoic teachings.

The Consolation of Philosophy has been published in every European language, and was one of the most popular books of the medieval period. It is an instrumental work in understanding the transition from classical philosophy to medieval philosophy.

The Consolation of Philosophy is apparently the fruit of Boethius’s spell of imprisonment awaiting trial and execution. Its literary genre, with a regular alternation of prose and verse sections, is called Menippean Satire, after Roman models of which fragments and analogues survive. The dialogue between two characters (one of whom we may call Boethius, but only on condition that we distinguish Boethius the character from Boethius the author, who surely manipulated his self-representation for literary and philosophical effect) is carefully structured according to the best classical models. Its language is classical in intent, but some of the qualities that would characterize medieval Latin are already discernible.

– Commentaries on the Works of Plato and Aristotle
– The Consolation of Philosophy
– Translations from the Greek (e.g. Aristotle’s ‘logical treatises’, Porphyry’s ‘Isagogue’)

– “If God is, whence come evil things? If He is not, whence come good?” (from “The Consolation of Philosophy”)

– “Man … is an animal, biped and reasoning.” (from “The Consolation of Philosophy”)