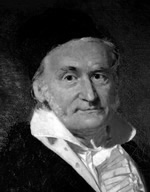 – Mathematics requires a new rigor in which Greek standards of precision are applied to the subject matter of contemporary mathematics.

– The goal of science is the pursuit of truth ‘for its own sake’.

– Due to its intrinsic independence from the material and the practical, ‘mathematics is the queen of the sciences’.

– Arithmetic, on the other hand, is ‘the queen of mathemetics’, since it is the most disinterested and pure.

– The logic that holds together mathematics also pervades the universe; we understand the universe by discovering its underlying mathematical theories.

Born in 1777 in Germany, Gauss was a child prodigy. The most famous story is of a young schoolboy Gauss summing the integers between 1 to 100 (answer=5050). Gauss’s teacher had made his class complete the assignment to grade papers but Gauss was able to add the numbers almost immediately. Gauss had found a way to add up an arithmetical series. Later, when he was 19, Gauss was able to demonstrate how to construct a heptadecagon (17 sides) using only a straightedge and compass (Euclid’s tools). By 19, Gauss could do what Euclid and other geometer’s had tried to do for a long time.

While working on his PhD in Gottingen, Gauss began to prove the fundamental theorem of Algebra. This theorem states that every polynomial has a root of the form a + bi. Gauss was able to prove that every number is the sum of at most three triangular numbers. Gauss then developed the algebra of congruences.

By 1801, Gauss had developed the “Least Squares Fitting” which is a procedure used to find the curve which best fits a group of points. Always afraid to publish his findings, Gauss did not publish his method and Adrien Legendre published first. Gauss employed his technique to calculate the oribit of the asteroid, Ceres. Gauss also proved himself to be an ingenius mathematical physicist and engineer. He constructed the first telegraph with Wilhelm Weber.

Gauss was infact the man who arrived at the conclusions about Euclid’s Fifth Postulate and could disprove for certain cases. However, Gauss’s moto of pauca sed matura(Few but ripe) prevented him from publishing his works. Later he received credit for his genius.

Sadly, Gauss passed away in 1855 in his hometown of Braunschweig.

– “Finally, two days ago I succeeded, not on account of my painful efforts, but by the Grace of God. Like a sudden flash of lightning, the riddle happened to be solved. I myself cannot say what was the conducting thread which connected what I previously knew with what made my success possible.” (from “Churchill’s Black Dog, Kafka’s Mice, and Other Phenomena of the Human Mind”, by Anthony Storr)