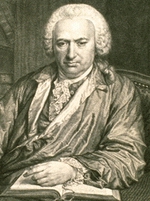 Charles Bonnet (1720-1793), a Swiss naturalist and philosophical writer, was born at Geneva on March 13, 1720, to a French family driven into Switzerland by the religious persecution in the 16th century.

He made law his profession, but his favorite pursuit was the study of natural science. The account of the ant-lion in N.A. Pluches Spectacle de la nature, which he read in his sixteenth year, turned his attention to insect life.

He procured R.A.F. de Raumurs work on insects, and with the help of live specimens succeeded in adding many observations to those of Raumur and Pluche. In 1740 Bonnet communicated to the academy of sciences a paper containing a series of experiments establishing what is now termed parthenogenesis in. aphides or tree-lice, which obtained for him the honor of being admitted a corresponding member of the academy. In 1741 he began to study reproduction by fusion and the regeneration of lost parts in the freshwater hydra and other animals; and in. the following year he discovered that the respiration of caterpillars and butterflies is performed by pores, to which the name of stigmata has since been given. In 1743 he was admitted a fellow of the Royal Society; and in the same year he became a doctor of law – his last act in connection with a profession which had ever been distasteful to him.

His first published work appeared in 1745, entitled Trait dinsectologie, in which were collected his various discoveries regarding insects, along with a preface on the development of germs and the scale of organized beings. Botany, particularly the leaves of plants, next attracted his attention; and after several years of diligent study, rendered irksome by the increasing weakness of his eyesight, he published in 1754 one of the most original and interesting of his works, Recherches sue lusage des feuilles dans les plantes; in which among other things he advances many considerations tending to show (as has quite recently been. done by Francis Darwin) that plants are endowed with powers of sensation and discernment. But Bonnets eyesight, which threatened to fail altogether, caused him to turn to philosophy.

In 1754 his Essai de psychologie was published anonymously in. London. This was followed by the Essai analytique sur les facults de ldme (Copenhagen, 1760), in which he develops his views regarding the physiological conditions of mental activity. He returned to physical science, but to the speculative side of it, in his Considerations sur les corps organiss (Amsterdam, 1762), designed to refute the theory of epigenesis, and to explain and defend the doctrine of pre-existent germs. In his Contemplation de la nature (Amsterdam, 1764-1765; translated into Italian, German, English and Dutch), one of his most popular and delightful works, sets forth, in eloquent language, the theory that all the beings in nature form a gradual scale rising from lowest to highest, without any break in its continuity. His last important work was the Palingnesie philosophique (Geneva, 1769-1770); in. it he treats of the past and future of living beings, and supports the idea of the survival of all animals, and the perfecting of their faculties in a future state.

Bonnets life was uneventful. He seems never to have left Switzerland, nor does he appear to have taken any part in public affairs except for the period between 1752 and 1768, during which he was a member of the coupcil of the republic. The last twenty five years of his life he spent quietly in the country, at Genthod, near Geneva, where he died after a long and painful illness on the 20th of May 1793.

His wife was a lady of the family of De la Rive. They had no children, but Madame Bonnets nephew, the celebrated H.B. de Saussure, was brought up as their son.

Bonnets philosophical system may be outlined as follows:

Man is a compound of two distinct substances, mind and body, the first one immaterial and the latter material. All knowledge originates in sensations; sensations follow (whether as physical effects or merely as sequents Bonnet will not say) vibrations in the nerves appropriate to each; and lastly, the nerves are made to vibrate by external physical stimulus. A nerve once set in motion by a particular object tends to reproduce that motion; so that when it a second time receives an impression from the same object it vibrates with less resistance. The sensation accompanying this increased flexibility in the nerve is, according to Bonnet, the condition of memory. When reflection that is, the active element in mind is applied to the acquisition and combination of sensations, those abstract ideas are formed which, though generally distinguished from, are thus merely sensations in combination only. That which puts the mind into activity is pleasure or pain; happiness is the end of human existence.

Bonnets metaphysical theory is based on two principles borrowed from Leibniz. First, there are not successive acts of creation, but that the universe is completed by the single original act of the divine will, and thereafter moves on by its own inherent force. Secondly, that there is no break in the continuity of existence. The divine Being originally created a multitude of germs in a graduated scale, each with an inherent power of self-development. At every successive step in the progress of the universe, these germs, as progressively modified, advance nearer to perfection; if some advanced and others did not there would be a gap in the continuity of the chain. Thus not only man but all other forms of existence are immortal. Nor is man’s mind alone immortal; his body also will pass into the higher stage, not, indeed, the body he now possesses, but a finer one of which the germ at present exists within him. It is impossible, however, to reach absolute perfection, because the distance is infinite.

In this final proposition Bonnet violates his own principle of continuity, by postulating an interval between the highest created being and the Divine. It is also difficult to understand whether the constant advance to perfection. is performed by each individual, or only by each race of beings as a whole. There seems, in fact, to be an oscillation between two distinct but analogous doctrines that of the constantly increasing advancement of the individual in. future stages of existence, and that of the constantly increasing advancement of the race as a whole according to the successive evolutions of the globe.

– Analytical Essay on the Faculties of the Mind, 1769
– Philosophical Palingenesis (Philosophical and Critical Inquiries concerning Christianity), 1770