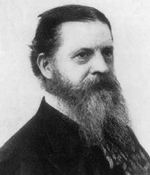 – What we expect from our forms of inference is that they give us true conclusions from true premises – if not all the time, then at least most of the time.

– Beliefs are established habits of action.

– The opinion that is fated to be agreed to by the community of those who follow the scientific method indefinitely is what we mean by truth.

– The phaneron is all of that which is before the mind and its aspects: Firsts, feelings or qualitative possibilities; Seconds, actualities; Thirds, laws, habits, or customs.

– All mental activity is of the nature of sign activity and every thought is a sign, which by virtue of some habit gives rise to another sign of the same object.

Charles Sanders Peirce is regarded as the founder of philosophical pragmatism, and, with Saussure, of modern semeiotic, and also as one of the founders of mathematical or symbolic logic. He was also deeply absorbed by linguistic researches throughout his life, learning languages in remote areas while travelling on geodetic surveys.

A natural scientist by training and the son of the eminent mathematician Benjamin Peirce, he developed the philosophical basis of semeiotic in a series of articles in the late 1860s (‘Questions Concerning Certain Capacities Claimed for Man’, ‘Some Consequences of Four Incapacities’). There Peirce levelled a devastating critique of Cartesian philosophy and foundationalism, arguing that all cognition is irreducibly triadic, of the nature of a sign, fallible, and thoroughly immersed in a continuing process of interpretation. He considered his semeiotic (as he spelled it, in contrast with current usage of ‘semiotics’ as an inclusive term for all the various studies of signs) as a general theory of logic, and saw language as but a portion of semeiosis.

Some of Peirce’s letters to Lady Welby were included in the appendix to Ogden and Richards The Meaning of Meaning, and, with Charles Morris’s largely unacknowledged appropriation of Peirce’s ideas in his influential monograph Foundations of the Theory of Signs (1938), Peirce’s ideas were problematically brought to the linguistics community and social sciences more generally.

Peirce’s writings are pervaded by triadic divisions, which, given that he felt himself to be at heart a mathematician, he expressed most basically in numerical form as Firstness, Secondness, and Thirdness. While still in his twenties Peirce first began to formulate these divisions using personal pronouns: I (Firstness), IT (Secondness), and THOU (Thirdness). In Peirce’s evolutionary cosmology, Thirdness, or triadic relation, or semeiosis, is considered to be a fact of the universe and not simply limited to the human mind, and therein lies the difference between Peirce and Kant, and between Peirce and much of modern linguistics and language theory.

By Peirce’s semeiotic realism language does not simply refer to things outside of signs. Though largely of a conventional nature, language is a mode of conduct, and as such, produces conceivable consequences and is normatively bounded. In its abilities to body forth new possibilities for conduct, to determine and be determined by further experience, and to communicate valid generals bearing conceivable consequences, language is real, in Peirce’s non-modern version of semeiotic realism. Both his realism and pragmatism are theoretically at odds with the positivism and behaviorism of Charles Morris, and to the nominalist conventionalism of Saussure and more recent poststructuralists.

Though linguists and semioticians have been most fascinated by Peirce’s elaborate triadic technical divisions of signs, such as icon, index, and symbol and type, token and (usually ignored) tone, the larger philosophical outlook and anthropology underlying those divisions have yet to be incorporated into linguistic studies.

– Collected Papers, Volumes I, II: Principles of Philosophy and Elements of Logic, III, IV: Exact Logic and The Simplest Mathematics, V, VI: Pragmatism and Pragmaticism and Scientific Metaphysics, VII, VIII: Science and Philosophy and Reviews, Correspondence and Bibliography, 1860-1911
– The Fixation of Belief, 1877
– How to Make Our Ideas Clear, 1878
– Photometric Researches, 1878

– “The object of reasoning is to find out, from the consideration of what we already know, something else which we do not know.” (from “The Fixation of Belief” published in Science Monthly, 1877)