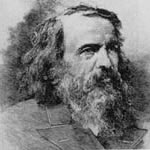 – Elements placed according to the value of their atomic weights present a clear periodicity of properties.

The youngest, of at least, fourteen children, Dimitri Ivanovitch Mendeleev was born at Tobolsk, Siberia, on 7th February, 1834. His father, Ivan, was the director of the local gymnasium, and his mother, Marya, came from a family that had introduced glass and paper making to Siberia. Ivan died when Dimitri was quite young and Marya had to return to work in order to support her family. Through family connections, she managed the Korniliev glass factory at Aremziansk.

Dimitri was educated at the gymnasium in Tobolsk, where he showed great interest in mathematics and physics. He also learned a lot about glass and glass blowing from the family factory. His brother-in-law, Bessargin, was also an influence in that he taught the young Mendeleev current science topics.

By the age of fourteen, Dimitri showed great scientific promise and his mother was determined that he should receive a good education. Her plans were thwarted when the glass factory was destroyed by fire.

The Mendeleev’s left for Moscow, hoping that Dimitri could attend university there. This did not work out, and so the family moved on to St Petersburg, where Dimitri was allowed to enrol as a student science teacher, having been granted a full scholarship. He began his course in 1850.

Within a few months, Dimitri’s mother, Marya and his sister had died from tuberculosis.

Despite this setback, Mendeleev continued his studies in St Petersburg. He made good progress until, in his third year of his course, he became ill which confined him to bed for a lengthy period. He was able to complete his course on time as his professors and fellow students visited him to help him keep his work on schedule.

He remained ill, and his doctor thought he had tuberculosis, with a poor prognosis for recovery. Dimitri moved to the Crimean Peninsula, where he taught at the gymnasium in Simferopol. The move south appears beneficial in that he made a recovery and his doctors could find no evidence of tuberculosis.

In 1856, Mendeleev was awarded his M.A. degree, followed in 1865 by his Ph.D. from the University of St Petersburg.

He was made Professor of Chemistry at the Technological Institute, St Petersburg, in 1863, and the same year married Feozvz Leshcheva. They had two children, a son, Volodya, and a daughter, Olga. The marriage was not a happy one, and ended in divorce in 1882. This allowed Dimitri to marry his niece’s best friend, Anna Popova. This marriage resulted in four children.

This is the discovery of the Periodic Law and the development of the Periodic Table. Mendeleev had a great interest in the elements, which up to his time were distinguished by only one basic property, that had been proposed by John Dalton in 1805, that each element has a characteristic atomic weight.

Mendeleev wrote the elements out on cards, atoms had their atomic weights and were set out in columns in order of atomic weight. He was unclear what to do with hydrogen, the lightest, and left it out.

He began his first column with lithium, an alkali metal, followed by beryllium, boron, carbon, nitrogen, oxygen, fluorine. His next column, in order of atomic weights was sodium, magnesium, aluminium, silicon, phosphorus, sodium and chlorine. he noticed a second column of seven, with fluorine and chlorine in the same horizontal row. He noted chemical properties of the elements were grouped into families. He left gaps in his table to locate the next element in its proper family and predicted properties of undiscovered elements that would fit these spaces. The predictions were confirmed when three predicted elements, gallium, germanium and scandium were discovered. This added to his stature in the scientific world.

In Russia, the Tsar considered Mendeleev’s politics too liberal and consequently, Dimitri Mendeleev resigned from the university in 1900. He remained a popular figure with the Russian people and was appointed Director of the Bureau of Weights and Measures in 1903. He continued in this post until his death from pneumonia on 20th January, 1907.