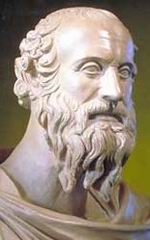 Diogenes was a Cynic philosopher of Sinope.

His father, Icesias, a banker, was convicted of debasing the public coin, and was obliged to leave the country; or, according to another account, his father and himself were charged with this offense, and the former was thrown into prison, while the son escaped and went to Athens.

Here he attached himself, as a disciple, to Antisthenes, who was at the head of the Cynics. Antisthenes at first refused to admit him into his house and even struck him with a stick. Diogenes calmly bore the rebuke and said, “Strike me, Antisthenes, but you will never find a stick sufficiently hard to remove me from your presence, while you speak anything worth hearing.” The philosopher was so much pleased with this reply that he at once admitted him among his scholars.

Both Antisthenes and Diogenes are called the founder of the school that is known as Cynicism.

The essential point in this world-view is that man suffers from too much civilization. We are happiest when our life is simplest, which means that we have to live in accordance with nature – just like animals. Human culture, however, is dominated by things that prevent simplicity: money, for example, and our longing for status.

Like his master, Diogenes refrained from luxury and often ridiculed civilized life. His philosophy gained some popularity because he focused upon personal integrity, whereas men like Plato and Aristotle had been thinking about man’s life and honor as member of a city state – a type of political unit that was losing importance in the age of Alexander the Great. However, we can not return to nature. The Cynics became some sort of jesters, accepted at the royal courts because their criticism was essentially harmless.

Diogenes fully adopted the principles and character of his master. Renouncing every other object of ambition, he distinguished himself by his contempt of riches and honors and by his invectives against luxury. He wore a coarse cloak, carried a wallet and a staff, made the porticoes and other public places his habitation, and depended upon casual contributions for his daily bread. He asked a friend to procure him a cell to live in; when there was a delay, he took up abode in a pithos, or large tub, in the Metroum. It is probable, however, that this was only a temporary expression of indignation and contempt, and that he did not make it the settled place of his residence. This famous “tub” is indeed celebrated by Juvenal; it is also ridiculed by Lucian and mentioned by Seneca. But no notice is taken of this by other ancient writers who have mentioned this philosopher.

It cannot be doubted, however, that Diogenes practiced self-control and a most rigid abstinence – exposing himself to the utmost extremes of heat and cold and living upon the simplest diet, casually supplied by the hand of charity. In his old age, sailing to Aegina, he was taken by pirates and carried to Crete, where he was exposed to sale in the public market. When the auctioneer asked him what he could do, he said, “I can govern men; therefore sell me to one who wants a master.” Xeniades, a wealthy Corinthian, happening at that instant to pass by, was struck with the singularity of his reply and purchased him. On their arrival at Corinth, Xeniades gave him his freedom and committed to him the education of his children and the direction of his domestic concerns. Diogenes executed this trust with so much judgment and fidelity that Xeniades used to say that the gods had sent a good genius to his house.

During his residence at Corinth, an interview between him and Alexander is said to have taken place. Plutarch relates that Alexander, when at Corinth, receiving the congratulations of all ranks on being appointed to command the army of the Greeks against the Persians, missed Diogenes among the number, with whose character he was acquainted. Curious to see the one who exhibited such haughty independence of spirit, Alexander went in search of him and found him sitting in his tub in the sun. “I am Alexander the Great,” said the monarch. “And I am Diogenes the Cynic,”replied the philosopher. Alexander then requested that he would inform him what service he could render him. “Stand from between me and the sun,” said the Cynic. Alexander, struck with the reply, said to his friends, who were ridiculing the whimsical singularity of the philosopher, “If I were not Alexander, I should wish to be Diogenes.” This story is too good to be omitted, but there are several circumstances which in some degree diminish its credibility. It supposes Diogenes to have lived in his tub at Corinth, whereas it is certain that he lived there in the house of Xeniades, and that, if he had ever dwelt in a tub, he left it behind him at Athens. Alexander, moreover, was at this time scarcely twenty years old, and could not call himself Alexander the Great, for he did not receive this title till his Persian and Indian expedition, after which he never returned to Greece; yet the whole transaction represents him as elated with the pride of conquest. Diogenes probably was visited by Alexander, when the latter held the general assembly of the Greeks at Corinth, and was received by him with rudeness and incivility, which may have given rise to the whole story. The philosopher at this time would have been about seventy years of age.

Various accounts are given concerning the manner and time of his death. It seems most probable that he died at Corinth, of mere decay, in the ninetieth year of his age and in the 114th Olympiad. A column of Parian marble, terminating in the figure of a dog, was raised over his tomb. His fellow-townsmen of Sinope also erected brazen statues in memory of the philosopher.

Diogenes left behind him no system of philosophy. After the example of his school, he was more attentive to practical than to theoretical wisdom.

Major Works of Diogenes of Sinope

– All works by Diogenes himself have been lost, including his famous Republic. Information about him comes from the works of other authors.

Quotes from Diogenes of Sinope

– “One original thought is worth a thousand mindless quotings.”

– “Acquaintance: They deride thee, O Diogenes!
Diogenes: But I am not derided.”