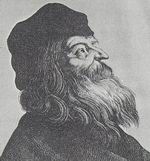 Empedocles was born in Acragas on the south coast of Sicily. The name Acragas is Greek, while the Latin name for the town was Agrigentum. Later the town was called Girgenti and more recently it became known by its present name of Agrigento. It was one of the most beautiful cities of the ancient world up to the time it was destroyed by the Carthaginians in 406 BC. It was, in Empedocles time, a rich city containing the finest Greek culture. Some of the Pythagoreans had come there after being attacked in their centre at Croton.

Empedocles was born into a rich aristocratic family. He travelled throughout the Greek world participating fully in the extraordinary desire for learning and understanding which gripped that part of the world.

Empedocles was a philosopher and poet: one of the most important of the philosophers working before Socrates (the Presocratics), and a poet of outstanding ability and of great influence upon later poets such as Lucretius.

His works On Nature and Purifications exist in more than 150 fragments. He has been regarded variously as a materialist physicist, a shamanic magician, a mystical theologian, a healer, a democratic politician, a living god, and a fraud.

To him is attributed the invention of the four-element theory of matter (earth, air, fire, and water), one of the earliest theories of particle physics, put forward seemingly to rescue the phenomenal world from the static monism of Parmenides. Empedocles’ world-view is of a cosmic cycle of eternal change, growth and decay, in which two personified cosmic forces, Love and Strife, engage in an eternal battle for supremacy.

In psychology and ethics Empedocles was a follower of Pythagoras, hence a believer in the transmigration of souls, and hence also a vegetarian. He claims to be a daimôn, a divine or potentially divine being, who, having been banished from the immortals gods for ‘three times countless years’ for committing the sin of meat-eating and forced to suffer successive reincarnations in an purificatory journey through the different orders of nature and elements of the cosmos, has now achieved the most perfect of human states and will be reborn as an immortal. He also claims seemingly magical powers including the ability to revive the dead and to control the winds and rains.