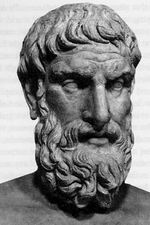 – The two criteria of knowledge are a clear view and noncontradiction.

– The universe is wholly material; it consists of material and void.

– Nothing is created out of nothing, and nothing is destroyed: The universe is neither increasing nor decreasing.

– It is in the nature of human beings to pursue pleasure and avoid pain; therefore, the good or virtuous life consists in the pursuit of pleasure and the avoidance of pain.

– True pleasure is found in imperturbability.

– The swerve of the atoms accounts for the presence of freedom of will in an otherwise causally determined universe.

Born in Samos of Athenian parents (Neocles and Chaerestrate), Epicurus studied first with Pamphilus, a Platonist, and later on the neighbouring island of Teos with Nausiphanes. This was his first introduction to the theories of Democritus.

At the age of 18 he went to Athens to perform his military service as an Athenian citizen, with – among others – Menander.

This duty accomplished, he went to Colophon (322-310), and then on to Mytilene and Lampsacus.

In all these places he taught, and gradually developed his own philosophical system.

In 306 he returned to Athens, where he founded his famous school and laid the foundations of the Epicurean / Hedonistic system.

Epicurus tried to explain phenomena in terms of the atoms and void, an idea from Democritus. He also supported the idea of evolution and believed that the universe is infinite using the argument of Archytas. Epicurus explains perception in terms of the interaction of atoms with the sense-organs. Objects continually throw off one-atom-thick layers, like the skin peeling off of an onion. These images, or “eidola”, fly through the air and bang into one’s eyes, from which one learns about the properties of the objects that threw off these eidola. This explains vision. Other senses are analyzed in similar terms; e.g., the soothing action of smooth atoms on the tongue causes the sensation of sweetness.

After Epicurus’ death, Epicureanism continued to flourish as a philosophical movement. Communities of Epicureans sprang up throughout the Hellenistic world; along with Stoicism, it was one of the major philosophical schools competing for people’s allegiances.

Epicureanism went into decline with the rise of Christianity. His idea to explain everything mechanistically avoiding direct causes by gods was a reason that he was considered an atheist.

Major Works of Epicurus of Samos

– To Herodutus
– To Menoecus
– To Pythocles
– Cardinal Principles
– On Nature