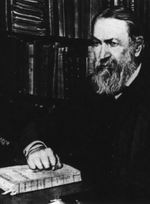 Ernst Mach was an Austrian physicist and philosopher.

Ernst Mach was born in Chrlice, Czech Republic. He was educated at home until the age of 14, then went briefly to gymnasium before entering the University of Vienna at 17. There he studied mathematics, physics and philosophy, and received a doctorate in physics in 1860.

His early work was focused on Doppler effect in optics and acoustics. In 1864 he took a job as professor of mathematics in Graz, in 1866 he was also appointed as a professor of physics. During that period Mach became interested also in physiology of sensory perception. In 1867 Mach took the chair of a professor of experimental physics at Charles University, Prague.

Mach returned to the University of Vienna as professor of inductive philosophy in 1895, but he suffered a stroke two years later and retired from active research in 1901, when he was appointed to the Austrian parliament. He continued to lecture and publish in retirement.