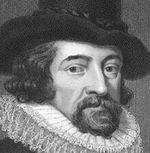 – The purpose of scientific knowledge is to make possible great works for the betterment of the human condition.

– Experiments are essential to the testing of theories.

– The human mind is prey to certain typical intellectual failures.

– In the generation and testing of theories, the negative instance is fundamental.

– The goal of the science of nature is the discovery of ‘forms’, the unobservable organization or structure of the particles of which all things are composed.

Francis Bacon, an English lawyer, statesman, essayist, historian, intellectual reformer, philosopher, and champion of modern science, was born in London in 1561 to a prominent and well-connected family. His parents were Sir Nicholas Bacon, the Lord Keeper of the Seal, and Lady Anne Cooke, daughter of Sir Anthony Cooke, a knight and one-time tutor to the royal family. Lady Anne was a learned woman in her own right, having acquired Greek and Latin as well as Italian and French. She was a sister-in-law both to Sir Thomas Hoby, the esteemed English translator of Castiglione, and to Sir William Cecil (later Lord Burghley), Lord Treasurer, chief counselor to Elizabeth I, and from 1572-1598 the most powerful man in England.

Bacon was educated at home at the family estate at Gorhambury in Herfordshire. In 1573, at the age of just twelve, he entered Trinity College, Cambridge, where the stodgy Scholastic curriculum triggered his lifelong opposition to Aristotelianism (though not to the works of Aristotle himself).

In 1576 Bacon began reading law at Gray’s Inn. Yet only a year later he interrupted his studies in order to take a position in the diplomatic service in France as an assistant to the ambassador. In 1579, while he was still in France, his father died, leaving him (as the second son of a second marriage and the youngest of six heirs) virtually without support. With no position, no land, no income, and no immediate prospects, he returned to England and resumed the study of law.

His father died when he was 18, and being the youngest son this left him virtually penniless.

He turned to the law, completed his law degree in 1582, and in 1588 he was named lecturer in legal studies at Gray’s Inn. In the meantime, he was elected to Parliament in 1584 as a member for Melcombe in Dorsetshire. He would remain in Parliament as a representative for various constituencies for the next 36 years.

In 1593 his blunt criticism of a new tax levy resulted in an unfortunate setback to his career expectations, the Queen taking personal offense at his opposition. Any hopes he had of becoming Attorney General or Solicitor General during her reign were dashed, though Elizabeth eventually relented to the extent of appointing Bacon her Extraordinary Counsel in 1596.

It was around this time that Bacon entered the service of Robert Devereux, the Earl of Essex, a dashing courtier, soldier, plotter of intrigue, and sometime favorite of the Queen. No doubt Bacon viewed Essex as a rising star and a figure who could provide a much-needed boost to his own sagging career. Unfortunately, it was not long before Essex’s own fortunes plummeted following a series of military and political blunders culminating in a disastrous coup attempt. When the coup plot failed, Devereux was arrested, tried, and eventually executed, with Bacon, in his capacity as Queen’s Counsel, playing a vital role in the prosecution of the case.

In 1603, James I succeeded Elizabeth, and Bacon’s prospects for advancement dramatically improved.

Knighted in 1603, he was then steadily promoted to a series of offices, including Solicitor General (1607), Attorney General (1613), and eventually Lord Chancellor (1618). While serving as Chancellor, he was indicted on charges of bribery and forced to leave public office. He then retired to his estate where he devoted himself full time to his continuing literary, scientific, and philosophic work.

He died in 1626, leaving behind a cultural legacy that, for better or worse, includes most of the foundation for the triumph of technology and for the modern world as we currently know it.

In a way Bacon’s descent from political power was a fortunate fall, for it represented a liberation from the bondage of public life resulting in a remarkable final burst of literary and scientific activity. As Renaissance scholar and Bacon expert Brian Vickers has reminded us, Bacon’s earlier works, impressive as they are, were essentially products of his “spare time.” It was only during his last five years that he was able to concentrate exclusively on writing and produce.

These late productions represented the capstone of a writing career that spanned more than four decades and encompassed virtually an entire curriculum of literary, scientific, and philosophical studies.