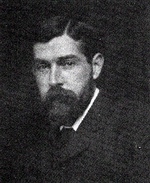 He was born at Clapham, Surrey, England. He was the child of Charles Bradley, an Evangelical preacher, and his second wife, Emma Linton. In 1865, he entered University College, Oxford.

He was a member of the movement known as British idealism and famous for his pluralistic approach to philosophy. His pluralistic outlook saw a unity transcending divisions between the philosophy of ethics, history, logic, epistemology, metaphysics and psychology.

One of Bradley’s notable characteristics, in his writing, is his technique of arguing from the meaning of a word. In his concern with word meanings he might be seen as anticipating the more language-orientated philosophy of the 20th century.

– The Principles of Logic, 1883 (The second, revised 1922 edition adds extensive commentary and terminal essays to the text of the first.)
– Appearance and Reality, London: Swan Sonnenschein, 1893 (The second 1897 edition contains a substantial and important Appendix. The most commonly encountered version now is the so-called ‘ninth impression’ of 1930, on which all subsequent printings have been based.)
– Essays on Truth and Reality, 1914 (Mostly published in Mind from 1899 onwards, these are major essays containing developments of Bradley’s logic and metaphysics, incisive criticism of William James and Bertrand Russell, and reflections on religion.)
– Ethical Studies (1927)
– Aphorisms, 1930 (The modern edition is bound together with ‘The Presuppositions of Critical History’ and contains an introduction to the latter by Guy Stock.)