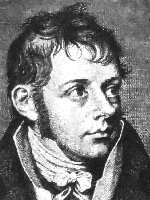 Friedrich Daniel Ernst Schleiermacher was a theologian and philosopher.

The son of a Prussian army chaplain of the Reformed confession, he was born at Breslau. He was educated in a Moravian school at Niesky in upper Lusatia, and at Barby near Halle. Moravian theology soon ceased to satisfy him, and his doubts took shape. Reluctantly his father gave him permission to enter the University of Halle, which had already abandoned pietism and adopted the rationalist spirit of Friedrich August Wolf and Johann Salomo Semler. As a student he pursued an independent course of reading and neglected the study of the Old Testament and Oriental languages. But he attended the lectures of Semler and of Johann Augustus Eberhard, acquiring from the former the principles of an independent criticism of the New Testament and from the latter his love of Plato and Aristotle. At the same time he studied with great earnestness the writings of Immanuel Kant and Friedrich Heinrich Jacobi. Thus he acquired his characteristic habit of forming his opinions by patiently examining and weighing the positions of all thinkers and parties. He combined this receptivity with the reconstructive power of a profoundly original thinker.

While a student he began to apply ideas from the Greek philosophers in a reconstruction of Kant’s system. At the completion of his course at Halle he became private tutor to the family of Count Dohna-Schlobitten, developing in a cultivated and aristocratic household his deep love of family and social life. Two years later, in 1796, he became chaplain to the Charité Hospital in Berlin. Lacking scope for the development of his preaching skills, he sought mental and spiritual satisfaction in the city’s cultivated society and in profound philosophical studies, beginning to construct the framework of his philosophical and religious system. It was now that he became acquainted with art, literature, science and general culture. He was profoundly affected by German Romanticism, as represented by his friend Karl Wilhelm Friedrich von Schlegel. Of this his Confidential Letters on Schlegel’s Lucinde, as well as his relationship with Eleonore Grunow, wife of a Berlin clergyman, are evidence.

Though his ultimate principles were unchanged, the struggle showed him the inner truth of human feeling and emotion, and enriched his imagination with ideals which gave elevation, depth and colour to his thought. Meanwhile he studied Spinoza and Plato, and was profoundly influenced by both; he made Kant more and more his master, though they differed on fundamental points, and finally remodelled his philosophy; he sympathised with some of Jacobi’s positions, and from Fichte and Schelling he accepted ideas which would be of value to him. The literary fruit of this period of intense fermentation and rapid development was his “epoch-making” book, Reden über die Religion (1799; ed. Göttingen, 1906), and his “new year’s gift” to the new century, the Monologen (1800; ed. 1902).

In the first book he gave religion an eternal place amongst the divine mysteries of human nature, distinguished it from all current caricatures and allied phenomena, and described the perennial forms of its manifestation, thereby giving the programme of his subsequent theological system. In the Monologen he revealed his ethical manifesto, in which he proclaimed his ideas on the freedom and independence of the spirit, and on the relationship of the mind to the sensual world, and sketched his ideal of the future of the individual and society.

From 1802 to 1804, Schleiermacher was pastor in the Pomeranian town of Stolpe. These years were full of literary work, as well as rich in personal and moral progress. He relieved Friedrich Schlegel entirely of his nominal responsibility for the translation of Plato, which they had together undertaken (vols. 1-5, 1804-1810; vol. 6, Repub. 1828). Another work, Grundlinien einer Kritik der bisherigen Sittenlehre (1803), the first of his strictly critical and philosophical productions, occupied him; it is a severe criticism of all previous moral systems, including those of Kant and Fichte — Plato’s and Spinoza’s find most favour. It contends that the tests of the soundness of a moral system are the completeness of its view of the laws and ends of human life as a whole and the harmonious arrangement of its subject-matter under one fundamental principle; and, though it is almost exclusively critical and negative, the book announces clearly the vision and scope of moral science which Schleiermacher subsequently adopted, attaching prime importance to a Guterlehre, or doctrine of the ends to be obtained by moral action. The obscurity of the book’s style and its negative tone prevented immediate success.

In 1804, Schleiermacher moved as university preacher and professor of theology to Halle, where he remained until 1807, quickly obtaining a reputation as professor and preacher; he exercised a powerful influence in spite of the contradictory charges of his being atheist, Spinozist and pietist. In this period he wrote his dialogue the Weihnachtsfeier (1806), a charming production, midway between his Reden and his great dogmatic work, Der christliche Glaube; the speakers represent phases of his growing appreciation of Christianity as well as the conflicting elements of the theology of the period. After the Battle of Jena he returned to Berlin (1807), was soon appointed pastor of the Trinity Church, and the next year married the widow of his friend Willich. At the foundation of the Friedrich Wilhelm University in Berlin (1810), in which he took a prominent part, he obtained a theological chair, and soon became secretary to the Academy of Sciences. He was thus placed in a position suited to his powers and in social surroundings adapted to the needs of his rich nature. At the same time he showed himself a large-hearted and fearless patriot in a time of national calamity and humiliation, acquiring a name and place in his country’s annals with Ernst Moritz Arndt, Fichte, Heinrich Friedrich Karl Stein and Gerhard Johann David von Scharnhorst. He took a prominent part in the reorganization of the Prussian church, and became the most powerful advocate of the union of the Lutheran and Reformed divisions of German Protestantism. The twenty-four years of his professional career in Berlin were opened with his short but important outline of theological study (Kurze Darstellung des theologischen Studiums, 1811), in which he sought to do for theology what he had done for religion in his Reden.

While he preached every Sunday, he also gradually took up in his lectures in the university almost every branch of theology and philosophy — New Testament exegesis, introduction to and interpretation of the New Testament, ethics (both philosophic and Christian), dogmatic and practical theology, church history, history of philosophy, psychology, dialectics (logic and metaphysics), politics, pedagogy and aesthetics. His own materials for these lectures and his students’ notes and reports of them are the only form in which the larger proportion of his works exist — a circumstance which has greatly increased the difficulty of getting a clear and harmonious view of fundamental portions of his philosophical and ethical system, while it has effectually deterred all but the most courageous and patient students from reading these posthumous collections. As a preacher he produced a powerful effect, yet not at all by the force of his oratory but by his intellectual strength, his devotional spirit and the philosophical breadth and unity of his thought. In politics he was an earnest friend of liberty and progress, and in the period of reaction which followed the overthrow of Napoleon Bonaparte, he was charged by the Prussian government with “demagogic agitation” in conjunction with the great patriot Arndt. At the same time he prepared his chief theological work Der christliche Glaube nach den Grundsatzen der evangelischen Kirche (1821-1822; 2nd ed., greatly altered, 1830-1831; 6th ed., 1884). The fundamental principle is that religious feeling, the sense of absolute dependence on God as communicated by Jesus through the church, and not the creeds or the letter of Scripture or the rationalistic understanding, is the source and law of dogmatic theology. The work is therefore simply a description of the facts of religious feeling, or of the inner life of the soul in its relations to God, and these inward facts are looked at in the various stages of their development and presented in their systematic connection. The aim of the work was to reform Protestant theology by means of the fundamental ideas of the Reden, to put an end to the unreason and superficiality of both supernaturalism and rationalism, and to deliver religion and theology from a relation of dependence on perpetually changing systems of philosophy. Though the work added to the reputation of its author, it naturally aroused the increased opposition of the theological schools it was intended to overthrow, and at the same time Schleiermacher’s defence of the right of the church to frame its own liturgy in opposition to the arbitrary dictation of the monarch or his ministers brought upon him fresh troubles. He felt isolated, although his church and his lecture-room continued to be crowded. He progressed with his translation of Plato and prepared a new and greatly altered edition of his Christliche Glaube, anticipating the latter in two letters to his friend Lucke (in the Studien und Kritiken, 1829), ih which he defended with a masterly hand his theological position generally and his book in particular against opponents on the right and the left. The same year he lost his only son — a blow which, he said, “drove the nails into his own coffin.” But he continued to defend his theological position against Hengstenberg’s party on the one hand and the rationalists von Cölln and D. Schulz on. the other, protesting .against both subscription. to the ancient creeds and the imposition of a new rationalistic formulary. In the midst of such labours, and enjoying still full bodily and mental vigour, he was carried off after a few days’ illness by inflammation of the lungs, on the 12th of February 1834.

– Hermeneutics: The Handwritten Manuscripts
– Hermeneutics and Criticism
– On the Different Methods of Translation
– Dialectic or The Art of Doing Philosophy (1811)
– Toward a Theory of Sociable Conduct
– On the Highest Good
– On What Gives Value to Life
– On Freedom
– Soliloquies
– On Religion: Speeches to Its Cultured Despisers
– Christmas Eve: Dialogue on the Incarnation
– The Life of Jesus
– The Christian Faith