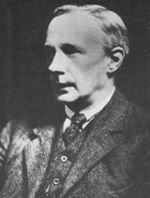 George Edward Moore, also known as G.E. Moore, (November 4, 1873 – October 24, 1958) was a distinguished and hugely influential English philosopher who was educated and taught at the University of Cambridge. He was, with Bertrand Russell, Ludwig Wittgenstein, and (before them) Gottlob Frege, one of the founders of the Analytic tradition in philosophy, which now predominates in the English-speaking world.

Moore is best known today for his defense of ethical non-naturalism, his emphasis on common sense in philosophical method, and the paradox which bears his name. He is very much “philosopher’s philosopher”—greatly admired and influential among other philosophers, but (unlike his friend and colleague Russell) mostly unknown today outside of academic philosophy. Moore’s essays are known for his clear, circumspect writing style, and for his methodical and patient approach to philosophical problems. Among his most famous works are his book Principia Ethica, and his essays, “The Refutation of Idealism”, “A Defence of Common Sense”, and “A Proof of the External World”.

G.E. Moore died on October 24, 1958 and was interred in the Burial Ground of Parish of the Ascension, Cambridge, England. The poet Nicholas Moore is his son.