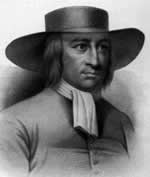 – God can be experienced by every person through the presence of the indwelling Christ or Spirit.

– Every human being must be respected because there is ‘that of God’ in everyone.

– Social inequalities are, therefore, abhorrent and must be eliminated.

– Worship takes place wherever the soul discovers God; it requires none of the traditional paraphernalia.

– There is no distinction between clergy and laity, for all can and should know God directly.

English religious leader, founder of the Society of Friends.

As a boy he was apprenticed to a shoemaker and wool dealer. By nature serious and contemplative, Fox at the age of 19 entered upon a wandering quest for spiritual enlightenment.

In 1646, he underwent a mystical experience that convinced him that Christianity was not an outward profession but an inner light by which Christ directly illumines the believing soul. Revelation was for Fox not confined to the Scriptures. In 1647, he began to preach. Although often the victim of mob brutality and eight times imprisoned between 1649 and 1675, Fox won many followers, especially among groups of separatists.

In 1668 he prepared the first pattern of organization, which was for some years to serve as the discipline of the Society of Friends.

The London Yearly Meeting was started in 1671. To confirm his followers in their beliefs and to spread the truths, Fox went in 1671 to the West Indies and to America, where he made arduous journeys to various colonies scattered between New England and North Carolina. Later he twice visited Holland.

His sincerity, serenity, fearlessness, and powerful preaching are attested to by a number of his contemporaries. His journal (1694, with a preface by William Penn) has appeared in various editions.