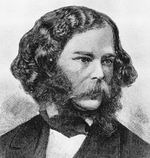 George Henry Lewes was a British philosopher and literary critic.

He was born in London, a grandson of Charles Lee Lewes, the actor. He was educated in London, Jersey, Brittany, and finally at Dr Charles Burney’s school in Greenwich. Having abandoned successively a commercial and a medical career, he seriously thought of becoming an actor, and between 1841 and 1850 appeared several times on the stage. Finally he devoted himself to literature, science and philosophy. As early as 1836 he belonged to a club formed for the study of philosophy, and had sketched out a physiological treatment of the philosophy of the Scottish school. Two years later he went to Germany, probably with the intention of studying philosophy.

In 1810 he married a daughter of Swynfen Stevens Jervil, and during the next ten years supported himself by contributing to the quarterly and other reviews. These articles discuss a wide range of subjects, and, though often imperfect, reveal acute critical judgment, enlightened by philosophic study. The most valuable are those on drama, afterwards republished under the title Actors and Acting (1875). With this may be taken the volume on The Spanish Drama (1846). The combination of wide scholarship, philosophic culture and practical acquaintance with the theatre gives these essays a high place among the best efforts in English dramatic criticism.

In 1845-1846 Lewes published The Biographical History of Philosophy an attempt to depict the life of philosophers as an ever-renewed fruitless labour to attain the unattainable. In 1847-1848 he made two attempts in the field of fiction–Ranthrope, and Rose Blanche and Violet–which, though displaying considerable skill both in plot, construction and in characterization, have taken no permanent place in literature. The same is to be said of an ingenious attempt to rehabilitate Robespierre (1849). In 1850 he collaborated with Thornton Leigh Hunt in the foundation of the Leader, of which he was the literary editor. In 1853 he republished under the title of Comte’s Philosophy of the Sciences a series of papers which had appeared in that journal. In 1851 he became acquainted with George Eliot, and in 1854 left his wife to live with her.

The culmination of Lewes’s work in prose literature is the Life of Goethe (1855), probably the best known of his writings. Lewes’s versatility, and his combination of scientific with literary tastes, eminently fitted him to appreciate the wide-ranging activity of the German poet. The work became well-known in Germany itself, despite the boldness of its criticism and the unpopularity of some of its views (e.g. on the relation of the second to the first part of Faust). From about 1853 Lewes’s writings show that he was occupying himself with scientific and more particularly biological work.

He always showed a distinctly scientific bent in his writings, and his closer devotion to science was the logical follow-on from his early impulses. Considering that he had not had the usual course of technical training, these studies are a remarkable testimony to the penetration of his intellect. The most important of these essays are collected in the volumes Seaside Studies (1858), Physiology of Common Life (1859), Studies in Animal Life (1862), and Aristotle, a Chapter from the History of Science (1864). They are much more than popular expositions of accepted scientific truths. They contain able criticisms of authorized ideas, and embody the results of individual research and individual reflection. He made several suggestions, some of which have since been accepted by physiologists. Of these the most valuable is that now known as the doctrine of the functional indifference of the nerves–that what are known as the specific energies of the optic, auditory and other nerves are simply differences in their mode of action due to the differences of the peripheral structures or sense-organs with which they are connected. This idea was subsequently arrived at independently by Wundt (Physiologische Psychologie, 2nd ed., p. 321). In 1865, on the starting of the Fortnightly Review, Lewes became its editor, but he retained the post for less than two years, when he was succeeded by John Morley.

This marks the transition from more strictly scientific to philosophic work. Lewes had been interested in philosophy from early youth; one of his earliest essays was an appreciative account of Regal’s Aesthetics. Coming under the influence of positivism as unfolded both in Auguste Comte’s works and in John Stuart Mill’s System of Logic, he abandoned all faith in the possibility of metaphysic, and recorded this abandonment in the above-mentioned History of Philosophy.

Yet he did not at any time give an unqualified adhesion to Comte’s teachings, and with wider reading and reflection his mind moved away further from the positivist standpoint. In the preface to the third edition of his History of Philosophy he avowed a change in this direction, and this movement is still more plainly discernible in subsequent editions of the work. The final outcome of this intellectual progress is given to us in The Problems of Life and Mind, which may be regarded as the crowning work of his life. His sudden death cut short the work, yet it is complete enough to allow a judgment on the author’s matured conceptions on biological, psychological and metaphysical problems. Of his three sons only one, Charles Lewes survived him; he became a London county councillor.