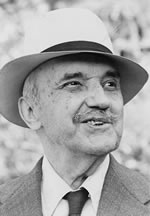 – Beauty is pleasure objectified – pleasure regarded as the quality of an object.

– Belief in the existence of anything is incapable of proof.

– By animal faith we believe in ourselves and a world of which we are a part.

– Knowledge is faith mediated by symbols.

– Spirit is a form of life in which values are consciously universalized.

Santayana was born in Madrid. His mother was Scottish and father Spanish. When Santayana was nine, his family moved to the United States, and settled in Boston. On arrival he did not speak English, though he made it his literary language. In new home country he considered himself only as an observer. Santayana never became an American citizen, he always kept his distance from the culture.

From 1889 to 1912 Santayana taught at Harvard University. He was Hyde Lecturer at Sorbonne, Paris, in 1905-1906. Santayana’s lectures on the philosophy of history formed the foundation of ‘The Life of Reason’ (1905-1906), an interpretation of the role of reason in manifold activities of the human spirit. According to Santayana happiness is the good for humankind and is best secured by the harmonization of our various interests by the use of reason. From this basis he asked ‘In which of its adventures would the human race, reviewing its whole experience, acknowledge a progress and a gain,’ and focused his survey on society, religion, art and science.

Santayana lived in America until he was 50 years old, and then started his life as a ‘wandering scholar.’ In 1912 he moved to Europe, living three years in England, then in France, and moving finally to Rome (1925-1952).

In 1923 he published ‘Scepticism and Animal Faith’, in which he formulated ideas of scepticism. According to Santayana, all rational processes are expressions of animal compulsion to believe certain things, such as the existence of matter. We have an irresistible urge (‘animal faith’) to believe in the independence of the external world. Further, Santayana distinguishes between existence and being – the latter has four realms: essence, matter, truth and spirit. Matter is external to consciousness, and all existence is grounded in matter. Spirit and body are realizations of the same fact in incomparable realms of being.

In ‘Interpretattion of Poetry and Religion’ (1900) Santayana stated that human imagination compensates for the limitations of understanding – art arises in response to our need for entertainment through our senses and imagination. ‘Mind does not come to repeat the world but to celebrate it.’ (from ‘A General Confession’, 1940)

During World War II Santayana stayed in Mussolini’s Italy, for which he was much criticized. For the remaining years of his life, Santayana was tended by the English sisters of the Little Company of Mary. He died in Rome on September 26, 1952. Santayana remained bachelor for his whole life. He was homosexual and in private had a disdain for heterosexuality – he called it ‘breeding’.

Santayana wrote poems, bestselling novel ‘The Last Puritan’ (1935) and a great deal of literary criticism. Santayana’s Platonist as well as materialist system of philosophy is set out in the comprehensive 4-volume ‘Realms of Being’ (1927-1940). In his philosophy Santayana despised idealism and Germany, its spiritual home, but was devoted to Christianity, in particular Catholic Christianity. He was generally sceptical about knowledge, and his political conservatism had also a sceptical foundation. He felt that no system of thought is to be trusted, and wrote in the essay ‘A General Confession’ that ‘mind does not come to repeat to world but celebrate it’.