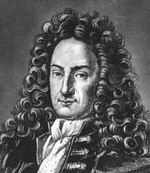 – There is an infinity of individual substances.

– The irreducible, indivisible, indestructibele unit of substrance is the ‘monad’.

– God is the ultimate, necessary being who is the sufficient reason for the existence of all other beings and who is the creator and orderer of all monads.

– Each monad is different from and independent of all others, but nonetheless linked together with all other monads in a universal and harmonious system.

– Since God is good, God will always act, both in creation and in providence, for the best.

– This order of creation is, therefore, ‘the best of all possible worlds’ as evodenced by the order of the system as a whole.

Gottfried Wilhelm Leibniz, a German philosopher, mathematician, and logician, was born in Leipzig, Germany, on July 1, 1646. He was the son of a professor moral philosophy, and after university study in Leipzig and elsewhere, it would have been natural for him to go into academia. Instead, he began a life of professional service to noblemen, primarily the dukes of Hanover (Georg Ludwig became George I of England in 1714, two years before Leibniz’s death). His professional duties were various, such as official historian and legal advisor. Above all, he was required to (or allowed to) travel widely, meeting many of the foremost intellectuals in Europe – of particularly formative importance were the astronomer, mathematician and physicist Huygens, and the philosopher Baruch Spinoza.

Leibniz was one of the great polymaths of the modern world. Moreover, a list of his significant contributions is almost as long as the list of his activities. As an engineer he worked on calculating machines, clocks and even mining machinery. As a librarian he more or less invented the modern idea of cataloguing. As a mathematician he not only produced ground-breaking work in what is now called topology, but came up with the calculus independently of (though a few years later) than Newton, and his notation has become the standard. In logic, he worked on binary systems among numerous other areas. As a physicist he made advances in mechanics, specifically the theory of momentum. He also made contributions to linguistics, history, aesthetics and political theory.

Leibniz’s curiosity and genius ranged widely, but one of the most constant of his concerns was to bring about reconciliation by emphasizing the truths that lay in both of even the most contradictory positions. Throughout his life, he hoped that his work on philosophy (as well as his work as a diplomat) would form the basis of a theology capable of reuniting the Church, divided since the Reformation in the 16th Century. Similarly, he was willing to engage with, and borrow ideas from, the materialists as well as the Cartesians, the Aristotelians as well as the most modern scientists. It is quite ironic, then, that he was partial cause of a dispute between British and Continental mathematicians concerning who was first to the calculus (and who might have plagiarised who). This dispute slowed down the advance of mathematics in Europe for over a century.

However, the great variety of his work meant that, sadly, he completed few of his ambitious projects. For our purposes here, this means above all that Leibniz’s rich and complex philosophy has to be gathered primarily from a large set of quite short manuscripts, many fragmentary and unpublished, as well has his vast correspondence. The last section of this entry gives bibliographical details of several editions of Leibniz’s work.

Partly because of the above fact, a major controversy in Leibniz scholarship is the question of where to begin. Insofar as Leibniz is a logician, it is tempting to begin with his conception of truth (and, indeed, this will be our starting point). But insofar as Leibniz is a metaphysician, it is equally tempting to begin with his account of the nature of reality and in particular substance. Less common, but perhaps equally likely starting points might lie in Leibniz the mathematician, the theologian or the physicist.

These controversies, however, already contain a lesson: to an important degree it doesn’t matter. So integrated were his various philosophical interests – so tightly laced together into a system – that one ought to be able to begin anywhere and reconstruct the whole. Or at least Leibniz evidently thought so, since very often we find him using an idea from one part of his philosophy to concisely prove something in an apparently quite distant philosophical region. Likewise, just this systematic nature often makes ‘getting into’ Leibniz the most difficult step, because every idea seems to rely upon the others.

Leibniz is known among philosophers for his wide range of thought about fundamental philosophical ideas and principles, including truth, necessary and contingent truths, possible worlds, the principle of sufficient reason (i.e., that nothing occurs without a reason), the principle of pre-established harmony (i.e., that God constructed the universe in such a way that corresponding mental and physical events occur simultaneously), and the principle of noncontradiction (i.e., that any proposition from which a contradiction can be derived is false). Leibniz had a lifelong interest in and pursuit of the idea that the principles of reasoning could be reduced to a formal symbolic system, an algebra or calculus of thought, in which controversy would be settled by calculations.