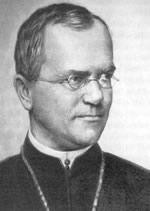 – The inheritance of characteristics is governed by pairs of discrete elements derived from each parent.

– These parental elements pass into the germ cells of the offspring without influencing each other; this is the law of segregation.

Gregor Johann Mendel was born in Hyncice, Moravia on 22 July 1822 in what is now the Czech Republic. The only son of a peasant farmer, Mendel attended local schools and the Philosophic Institute at Olomouc. In 1843, he entered the Augustinian Order at St. Thomas Monastery in Brünn and began his theological studies at the Brünn Theological College. He was ordained to the priesthood on 6 August 1847.

The Augustinians had been established in Moravia since 1350, and St. Thomas Monastery was a center of creative interest in the sciences and culture. Its members included well-known philosophers, a musicologist, mathematicians, mineralogists and botanists who were heavily engaged in scientific research and teaching. The library contained precious manuscripts and incunabula, as well as textbooks dealing with problems in the natural sciences. The monastery also held a mineralogical collection, an experimental botanical garden and a herbarium. It was in this atmosphere, Mendel later wrote, that his preference for the natural sciences was developed.

After his ordination, Mendel was assigned to pastoral duties, but it soon became apparent that he was more suited to teaching. In 1849, he was assigned to a secondary school in the city of Znaim, where he was well received by his students. However, when he took the qualifying state examination for teacher certification, he failed. Recognizing that Mendel was largely self-taught, one of his examiners recommended that he be sent for further studies in the natural sciences. The abbot agreed, and Mendel was sent to the University of Vienna in order to improve his preparation for the reexamination.

Mendel spent two years in Vienna (1851- 1853), where he attended lectures and seminars in the natural sciences and mathematics. It was there that he acquired the empirical, methodological and scientific research skills which he was to apply to his later investigations. Mendel returned to teaching in Brünn in 1854 but when, two years later, he again attempted the state certification examination he became ill, most likely as a result of debilitating test anxiety, and withdrew. He did not pursue the examination further but returned to Brünn in 1856 where he continued to teach part-time.

Mendel began his experiments after his return from Vienna. Using thirty-four different kinds of peas of the genus Pisum which had been tested for their genetic purity, he tried to determine whether it was possible to obtain new variants by crossbreeding. Peas were carefully chosen as pollination could be easily controlled and normally pea plants are self-fertilizing. His research involved careful planning, necessitated the use of thousands of experimental plants, and, by his own account, extended over eight years. Prior to Mendel, heredity was regarded as a “blending” process and the offspring were essentially a “dilution”of the different parental characteristics.

Mendel demonstrated that the appearance of different characters in heredity followed specific laws which could be determined by counting the diverse kinds of offspring produced from particular sets of crosses. He established two principles of heredity that are now known as the law of segregation and the law of independent assortment, thereby proving the existence of paired elementary units of heredity (factors) and establishing the statistical laws governing them. He became the first to understand the importance of statistical investigation and to apply a knowledge of mathematics to a biological problem.

Mendel’s findings on plant hybridization were presented in two lectures before the Society for the Study of the Natural Sciences in Brünn in 1865. His paper, Versuche über Pflanzen-Hybriden (“Experiments in Plant Hybridization,”) was published in the society’s Proceedings in 1866 and sent to133 other associations of natural scientists and to the more important libraries in a number of different countries. Mendel also ordered 40 reprints of the article which he sent to scholars outside of Brünn. His work, however, was largely ignored. In the spring of 1900, three botanists, Hugo de Vries (Holland), Karl Correns (Germany) and E. von Tschermak (Austria) reported independent verifications of Mendel’s work which amounted to a rediscovery of his first principle.

Mendel continued to conduct research in horticulture, apiculture, meteorology, and astronomy. He corresponded with Karl von Nägeli who encouraged him to carry out his next series of experiments on various species of the genus Hieracium (hawkweed). Mendel was not able to replicate his findings as the hawkweed reproduces asexually from diploid tissue in the ovary (apomixis), producing clones of the parent. In 1869 he published a report that hinted that the results were different from those obtained for Pisum, but left the problem open for further research. The arduous experiments required the use of a microscope, mirrors, fine needles, and artificial light and caused such severe eyestrain and backaches that Mendel was obliged to interrupt his research for long periods of time. It has also been speculated that had Mendel’s research been confirmed in other organisms, his reputation might have spread more rapidly.

On 30 March 1868, Mendel was elected abbot of St. Thomas Monastery. His new duties involved many civic responsibilities that took him away from his scientific work. Almost immediately he became involved in a confrontation with the government over the payment of past taxes. A new taxation law in 1874 increased the tax on the monasteries to cover the expenses of Church institutions. Mendel, alone among the monastery superiors, vigorously contested the tax and refused to recognize the validity of the law. He became isolated both in the monastery and in public life until his death.

Mendel died in Brünn on 6 January 1884. In his last years Mendel lived a solitary life. Just before his death he commented: “My scientific labors have brought me a great deal of satisfaction, and I am convinced that before long the entire world will praise the result of these labors.” His serene confidence despite the lack of recognition his work received was to be vindicated. Mendel remains one of the great biologist of the nineteenth century and the inspiration for one of the most challenging sciences of our time – genetics.