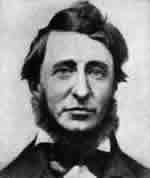 – The search for ultimate begins with simplification and the dispelling of the superfluities of life, and with the desire for clarity of vision and spiritual alertness.

– There exists within each human being a moral sense and an intuitive capacity for the apprehension of spiritual turths.

– The divine source of all things exists in nature, yet divine reality is not exhausted by nature.

– Reformation, even the reformation of society, begins with the reforming of the individual.

– Action from principle brings about change in institutions and governments.

Henry David Thoreau was born in Concord, Massachusetts, on 12th July, 1817. After attending Harvard University (1833-1837) he joined with his brother to establish his own school in Concord.

Thoreau loved nature and spent most of his free time exploring the local countryside. After the death of his brother in 1841, Thoreau was invited to stay with his friend, the philosopher, Ralph Waldo Emerson. Thoreau also began writing during this period and some of his poems appeared in The Dial.

In 1845 Thoreau built himself a house in the woods on land owned by Emerson. The following year he was imprisoned for refusing to pay his poll tax. His opposition to the Mexican War resulted in the influential essay, Civil Disobedience (1849). Thoreau’s argument that it was morally justified to peacefully resist unjust laws inspired Americans involved in the struggle against slavery and the fight for trade union rights and women’s suffrage.

Thoreau’s most popular book, Walden (1854), was a long autobiographical essay in which he set out his ideas on how the individual should live his life. In the book he describes his two-year experiment in self-sufficiency (1845-1847). Thoreau wrote and lectured against slavery and for many years was a member of the Underground Railway. and was a close friend of the radical abolitionist, JOHN BROWN.

Most of Thoreau’s work was published after his death from tuberculosis on 6th May, 1862.