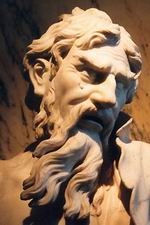 Heraclitus of Ephesus (6TH CENTURY BC).

Heraclitus, a Greek philosopher of the late 6th century BC, lived in Ephesus, an important city on the Ionian coast of Asia Minor, not far from Miletus, the birthplace of philosophy.

We know nothing about his life other than what can be gleaned from his own statements, for all ancient biographies of him consist of nothing more than inferences or imaginary constructions based on his sayings.

Although Plato thought he wrote after Parmenides, it is more likely he wrote before Parmenides.

For he criticizes by name important thinkers and writers with whom he disagrees, and he does not mention Parmenides.

On the other hand, Parmenides in his poem arguably echoes the words of Heraclitus. Heraclitus criticizes the mythographers Homer and Hesiod, as well as the philosophers Pythagoras and Xenophanes and the historian Hecataeus.

All of these figures flourished in the 6th century BCE or earlier, suggesting a date for Heraclitus in the late 6th century. Although he does not speak in detail of his political views in the extant fragments, Heraclitus seems to reflect an aristocratic disdain for the masses and favor the rule of a few wise men, for instance when he recommends that his fellow-citizens hang themselves because they have banished their most prominent leader.

Heraclitus criticizes his predecessors and contemporaries for their failure to see the unity in experience. He claims to announce an everlasting Word (Logos) according to which all things are one, in some sense.

Opposites are necessary for life, but they are unified in a system of balanced exchanges. The world itself consists of a law-like interchange of elements, symbolized by fire.

Thus the world is not to be identified with any particular substance, but rather with an ongoing process governed by a law of change. The underlying law of nature also manifests itself as a moral law for human beings. Heraclitus is the first Western philosopher to go beyond physical theory in search of metaphysical foundations and moral applications.

Major Works of Heraclitus of Ephesus