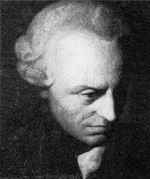 – Although all knowledge begins with experience, it does not all arise out of experience.

– Knowledge of an orderly world is made possible through the complementary activities of the senses and the mind.

– The matter of our experience is due to our senses and its form is contributed by the mind.

– The world we know is a phenomenal world; we have no knowledge of things-in-themselves.

– The only thing good without qualification is a good will.

– One ought to act only according to a principle of action that can be universalized.

– One ought to treat all rational beings as ends in themselves and never merely as means.

– The autonomy of the self-legislating will is the basis of human dignity.

– Belief in God is a postulate of practical reason.

Born in Königsberg (now Kaliningrad, Russia), April 22, 1724, Immanuel Kant received his education at the Collegium Fredericianum and the University of Königsberg.

At the college he studied chiefly the classics, and at the university he studied physics and mathematics.

After his father died, he was compelled to halt his university career and earn his living as a private tutor. In 1755, aided by a friend, he resumed his studies and obtained his doctorate. Thereafter, for 15 years he taught at the university, lecturing first on science and mathematics, but gradually enlarging his field of concentration to cover almost all branches of philosophy.

Although Kant’s lectures and works written during this period established his reputation as an original philosopher, he did not receive a chair at the university until 1770, when he was made professor of logic and metaphysics.

For the next 27 years he continued to teach and attracted large numbers of students to Königsberg.

Kant’s unorthodox religious teachings, which were based on rationalism rather than revelation, brought him into conflict with the government of Prussia, and in 1792 he was forbidden by Frederick William II, king of Prussia, to teach or write on religious subjects.

Kant obeyed this order for five years until the death of the king and then felt released from his obligation. In 1798, the year following his retirement from the university, he published a summary of his religious views.

Immanuel Kant is one of the most influential philosophers in the history of Western philosophy. His contributions to metaphysics, epistemology, ethics, and aesthetics have had a profound impact on almost every philosophical movement that followed him. This portion of the Encyclopedia entry will focus on his metaphysics and epistemology in one of his most important works, The Critique of Pure Reason. (All references will be to the A (1781) and B(1787) edition pages in Werner Pluhar’s translation. Indianapolis: Hackett, 1996.) A large part of Kant’s work addresses the question “What can we know?” The answer, if it can be stated simply, is that our knowledge is constrained to mathematics and the science of the natural, empirical world. It is impossible, Kant argues, to extend knowledge to the supersensible realm of speculative metaphysics. The reason that knowledge has these constraints, Kant argues, is that the mind plays an active role in constituting the features of experience and limiting the mind’s access to the empirical realm of space and time.

In order to understand Kant’s position, the philosophical background that he was reacting to must be understood first. There are two major historical movements in the early modern period of philosophy that had a significant impact on Kant: Empiricism and Rationalism.

Kant argues that both the method and the content of these philosophers’ arguments contain serious flaws. A central epistemological problem for philosophers in both movements was determining how we can escape from within the confines of the human mind and the immediately knowable content of our own thoughts to acquire knowledge of the world outside of us.

The Empiricists sought to accomplish this through the senses and a posteriori reasoning. The Rationalists attempted to use a priori reasoning to build the necessary bridge. A posteriori reasoning depends upon experience or contingent events in the world to provide us with information. That “Bill Clinton is president of the United States in 1999,” for example, is something that I can know only through experience; I cannot determine this to be true through an analysis of the concepts of “president” or “Bill Clinton.” A priori reasoning, in contrast, does not depend upon experience to inform it. The concept “bachelor” logically entails the ideas of an unmarried, adult, human male without my needing to conduct a survey of bachelors and men who are unmarried.

Kant believed that this twofold distinction in kinds of knowledge was inadequate to the task of understanding metaphysics.