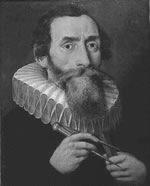 – God did not create the universe haphazardly. A rational architecture underlies the structure of the solar system.

– A force emanating from the sun governs the motion of the celestial bodies.

– Weight arises from the mutual attraction between two bodies.

German astronomer and natural philosopher, noted for formulating and verifying the three laws of planetary motion. These laws are now known as Kepler’s laws.

Kepler was born on December 27, 1571, in Weil der Stadt in Württemberg and studied theology and classics at the University of Tübingen. There he was influenced by a mathematics professor, Michael Maestlin, an adherent of the heliocentric theory of planetary motion first developed by the Polish astronomer Nicolaus Copernicus. Kepler accepted Copernican theory immediately, believing that the simplicity of Copernican planetary ordering must have been God’s plan. In 1594, when Kepler left Tübingen for Graz, Austria, he worked out a complex geometric hypothesis to account for distances between the planetary orbits—orbits that he mistakenly assumed were circular. (Kepler later deduced that planetary orbits are elliptic; nevertheless, these preliminary calculations agreed with observations to within 5 percent.) Kepler then proposed that the sun emits a force that diminishes inversely with distance and pushes the planets around in their orbits. Kepler published his account in a treatise entitled Mysterium Cosmographicum (Cosmographic Mystery) in 1596. This work is significant because it presented the first comprehensive and cogent account of the geometrical advantages of Copernican theory.

Kepler held the chair of astronomy and mathematics at the University of Graz from 1594 until 1600, when he became assistant to the Danish astronomer Tycho Brahe in the latter’s observatory near Prague. On the death of Brahe in 1601, Kepler assumed his position as imperial mathematician and court astronomer to Rudolf II, Holy Roman emperor. One of his major works during this period was Astronomia Nova (New Astronomy, 1609), the great culmination of his painstaking efforts to calculate the orbit of Mars. This treatise contains statements of two of Kepler’s so-called laws of planetary motion. The first is that the planets move in elliptic orbits with the sun at one focus; the second, or “area rule,” states that a hypothetical line from the sun to a planet sweeps out equal areas of an ellipse during equal intervals of time; in other words, the closer a planet comes to the sun, the more rapidly it moves.

In 1612 Kepler became mathematician to the states of Oberösterreich (Upper Austria). While living in Linz, he published his Harmonice Mundi (Harmony of the World, 1619), the final section of which contained another discovery about planetary motion: The ratio of the cube of a planet’s distance from the sun and the square of the planet’s orbital period is a constant and is the same for all planets. See Orbit.

At about the same time he began publishing a book that took three years to appear, the Epitome Astronomiae Copernicanae (Epitome of Copernican Astronomy, 1618-1621), which brought all of Kepler’s discoveries together in a single volume. Equally important, it became the first textbook of astronomy to be based on Copernican principles, and for the next three decades it was a major influence in converting many astronomers to Keplerian Copernicanism.

The last major work to appear in Kepler’s lifetime was the Tabulae Rudolfinae (Rudolfine Tables, 1625). Based on Brahe’s data, the new tables of planetary motion reduced the mean errors from 5° to within 10¢ of the actual position of a planet. The English mathematician Sir Isaac Newton relied heavily on Kepler’s theories and observations in formulating his theory of gravitational force.

Kepler also made contributions in the field of optics and developed a system of infinitesimals in mathematics, which was a forerunner of calculus.