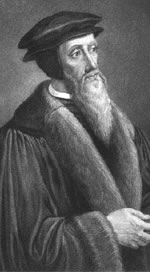 – Though God’s essential nature is incomprehensible, partial knowledge of God is available through God’s self-revelation.

– The Bible is the sole source of this adapted revelation.

– The Bible reveals God as the triume crateor of everything, actively and universally ruling all aspects of the continuing creation.

– The Bible reveals humanity as having fallen into sin through Adam, therebylosing all free will and ability to restore itself to right relationship with God and creation.

– Individuals are united to Christ through membership in the true church, which is marked by the Word rightly proclaimed and the sacraments correctly administered.

John Calvin was born in Noyon, France, near Compiegne. His father was a lawyer for the Roman Catholic Church. Young Calvin was educated in Paris, Orleans and Bourges. Calvin planned to be a lawyer as his father was, but it is likely that he never inwardly committed himself to that career. With his father died in May of 1931, Calvin was free to make his choice. He completed his doctorate in law but then came to study Greek and Latin and the University of Paris. Calvin’s life then took a new direction that he refers to as a “sudden conversion”. He writes about his experience in the introduction to his Commentary on the Psalms written in 1557: “Since I was more stubbornly addicted to the superstitions of the Papacy than to be easily drawn out of so deep a mire, God subdued my heart-too stubborn for my age-to docility by a sudden conversion.”

Therefore, by 1533 Calvin had declared himself a Protestant. In 1534 Calvin moved to Basel, Switzerland where there, two years later in 1536, he published his first edition on Institutes of the Christian Religion. Calvin’s book was the most influential work in the development of the Protestant churches of the Reformed tradition. It sets forth his basic ideas of religion, and he expanded it throughout his life.

After much persuasion in 1536, Calvin became a leader of Geneva’s first group of Protestant pastors, even though he was probably never ordained a priest. In 1538, Calvin and some of the other Protestant pastors were banished for their strict doctrines. While Calvin was banished from Geneva he became the pastor of a French refugee Protestant church in Strasbourg, Germany. There he met Martin Baucer who greatly influenced him. Calvin adapted many of Baucer’s ideas on church government and worship. Also while in Strasbourg, Calvin met and married Idelette de Bure, a widow. The couple’s only child died in infancy. In 1541 the Geneva city council begged Calvin to return due to their lack of able religious and political leadership. Calvin’s wife died in 1549 and he never remarried. Calvin developed a constitution for Geneva with dealt with both secular and sacred matters. He also pushed for the development of a municipal school system for all children. In 1559 Calvin open! ed the Geneva Academy as the center of instruction for the best students. Shortly thereafter, the academy was named a full university. Calvin remained the dominant personality in Geneva and continued to improve the lives of the citizens in Geneva until the time of his death in 1564.

Calvinists are not followers of John Calvin, but of his idea. Calvin’s Protestant faith emphasizes the omnipotence of God and the salvation of the elect by God’s grace alone, basically the theory of predestination. The “elected” are known as “saints” in the Calvinist faith. Calvin denied that human beings were capable of free will. Calvin also stated that the writings of the scriptures are to be taken literally. Following the history of the earliest church recounted in the New Testament book, The Acts of the Apostles, Calvin organized the church of Geneva into four levels:

Pastors: These were five men who exercised authority over religious matters in Geneva

Teachers: This was a larger group whose job it was to teach doctrine to the population

Elders: The Elders were twelve men (after the twelve Apostles) who were chosen by the municipal council; their job was to oversee everything, that everybody did in the city.

Deacons: Modeled after the Seven in Acts 6-8, the deacons were appointed to care for the sick, the elderly, the widowed, and the poor.

With his life and teachings, John created the patterns and thoughts that would dominate Western culture throughout the modern period. American culture, in particular, is thoroughly Calvinist in some form or another. At the heart of the way Americans think and act, you will find the fierce and imposing reformer, John Calvin.