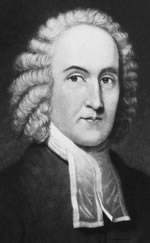 – The world was created out of and is maintained only by the abundance, grace, and love of the sovereign and radically trancendent God, who foreordains all of life according to his provodentoal but hidden will.

– Although themselves endowed with will and reason, both of which operate solely within God’s providential and determinative designs, human creatures have inhering in them the Original Sin of Adam and thus live a completely contingent existence in God’s redemptive scheme without the reception of grace.

– In the apprehension og God’s will and in the plan of salvation, human reason, nature, and works do not suffice; God’s grace alone is effectual, and it is bestowed only in divinely mysterious election of the saints, who are themselves justified in God’s sight only by faith.

– Such faith, itself a gift of unconditional grace, occurs at an ‘affective’ or experiential level, beyond the capacity of reason, as ‘a divideand supernatural light’ enters the heart and permits human consent to the whole of being.

Jonathan Edwards, considered by many to be one of the greatest preachers and churchmen in American history, was born in East Windsor, Connecticut into a family with a long tradition of ministry. Entering Yale as one of its earliest students at the age of thirteen, Edwards graduated at the head of his class four years later and began a two-year course of theological study in New Haven. Having completed his education in 1722, he took up a pastorate in a Presbyterian church in New York, but left there to take a position as tutor at Yale in 1724, a position that he held for two years.

From 1725 he served as an assistant to his maternal grandfather, Solomon Stoddard, who was the Congregationalist pastor of Northampton, Massachusetts. Upon Stoddard’s death in 1729, Edwards succeeded to the pulpit. His preaching during this period was received with mixed results. On the positive side, the power of his message is credited with bringing about the first Great Awakening of American history, beginning in 1734, when six sudden conversions in Edwards’ parish turned into a flood of thirty per week, drawing people from up to a hundred miles away.

Despite this success, however, Edwards alienated many in his congregation by insisting on more stringent membership requirements than were customary at the time. His first inclination was to insist on visible evidence of conversion and regeneration, but he eventually settled for a public profession of faith. His move to exclude from the Communion those who did not meet these standards led to a two-year battle within the congregation. In 1750, Edwards was dismissed from his pastorate.

Much of Edwards’ most celebrated work comes from his Northampton period. These works include his Treatise Concerning Religious Affections, his Treatise on Grace, and many of his most important sermons.

The ensuing years were difficult for the family as they struggled with debt and loss of income. Edwards settled Stockbridge, Massachusetts, then a frontier settlement, where he ministered to a small congregation and served as missionary to the Indians. It was here that he completed his fine work, The Freedom of the Will.

After several years on the frontier, Edwards yielded to considerable pressure and assumed the presidency of Princeton in the fall of 1757. He held the position for less than a year, dying in March 1758 of a fever in reaction to a smallpox innoculation.

More than two centuries after his death, Edwards is remembered as a fine preacher and an adamant defender of Calvinist theology.