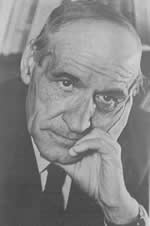 – Human beings and their circumstances exist in a dynamic interplay.

– ‘I am I and my circumstance’ is the phrase that conveys this dynamic interplay.

– The individual can influence his circumstance but he cannot disregard it.

– How the individual influences his circumstance is his ‘quehacer vital’, or his creative action.

– Vital reason as opposed to pure reason is derived from history, which provides a story that leads to the reality of human life.

– Human beings create thir lives by exercising vital reason and exerting their will.

– The hero, or the excellent man, creates the noble life by exerting his will to go beyond the ordinary and the given.

– The opposite of the hero, the mass man, is content with his own mediocrity and relies on opinion rather than reason.

– Perspectivism means that although each individual sees truth from a unique perspective, truth itself is absolute.

The Spanish essayist and philosopher, José Ortega y Gasset (1883-1955), was born in Madrid of a patrician family.

In 1923 he founded the Revista de occidente, a review of books that was instrumental in bringing Spain in touch with Western, and specifically German thought. Ortega’s work as editor and publisher helped end Spain’s isolation from contemporary western culture.

Ortega led the republican intellectual opposition under the dictatorship of Primo de Rivera (1923-1936), and he played a role in the overthrow of King Alfonso XIII in 1931. Elected deputy for the province of León in the constituent assembly of the second Spanish republic, he was the leader of a parliamentary group of intellectuals know as La Agrupación al servicio de la república (“In the service of the republic”) and was named civil governor of Madrid. Such a commitment obliged him to leave Spain at the outbreak of the Civil War, and he spent years of exile in Argentina and Europe.

He settled in Portugal in 1945 and began to make visits to Spain. In 1948 he returned to Madrid and founded the Institute of Humanities, at which he lectured.

A prolific writer, Ortega was the head of the most productive school of thinkers Spain had known for more than three centuries and helped place philosophy beyond the reach of a centuries-old reproach that it was somehow un-Spanish, and therefore dangerous.