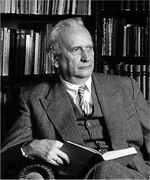 Karl Jaspers (pronounced “Yaspers”) was born 23 February 1883 in Oldenburg to Carl William and Henriette Jaspers, a respected family within the community. Carl was a lawyer, the local sheriff for a time, and a bank director.

Jaspers did well in secondary school, which he atttended from 1892–1901. At graduation he had been accepted to the University of Freiburg law school. About this time, Jaspers was diagnosed with heart problems. Doctors told Jaspers to avoid strenuous activity.

After studying law in Freiburg and Munich for three terms, Jaspers moved to Berlin and began to pursure a medical degree. Jaspers left Berlin for the University of Goettingen, where he studied from 1903 to 1906. Jaspers took the medical exams in 1908.

After receiving his initial degree in 1908, Jaspers interned in the psychiatric ward at a hosptial in Heidelberg. In February 1909 he received his M.D. and psychiatric degrees in Heidelberg, Germany. Jaspers’ doctorate thesis was “Homesickness and Crime.”

Jaspers married Gertrud Mayer, a Jewish woman, in 1910. His marriage and love for his wife would later influence Jaspers’ view of the Third Reich and the German people.

Among pscyhiatric patients, Jaspers began to formulate a link between psychology and philosophy. Psychoanalysis and existentialism were also linked in the works of philosopher Jean-Paul Sartre and analysts Viktor Frankl and Rollo May. Four years after obtaining his psychiatric degree, Jaspers published General Psychopathology, a major work on mental illness that remains influential in the field. This 1913 work remains popular within university courses.

World War I, 1914–1918, deeply affected Jaspers, as it did most Europeans. He was interested in a number of psychological effects experienced by soldiers and civilians.

In 1932, he published a collection of thoughts as Philosophy (of Karl Jaspers). The work focused on how to study the problem of existence without objectifying man or resorting to mysticism an artificial depth.

The National Socialists did not appreciate Jaspers opinions. In 1933, as World War II began, Jaspers was relieved of most teaching duties by the Nazis. Being removed from the administation, and losing his “full” status did not silence Jaspers.

By 1937 he was completely removed from the classroom and the university. He resented the Nazis and the people so willing to follow Hitler into war. However, Jaspers retained his pride in Germany and its intellectual past.

The government, angered that Jaspers spoke about the mistreatment of Jews, prohibited publication of Jaspers’ works in 1943 — as the war was ending.

Jaspers returned to teaching at Heidelberg following World War II. The American administrators reinstated him to the university faculty. Jaspers dedicated himself to creating a new, liberalized, university.

With Dolf Sternberger, Jaspers co-founded the magazine The Transformation. The magazine pushed a “liberal” agenda, along with a dedication to moral clarity. Jaspers started to attract some anger from the German people, and he did not shy away from this attention.

Jaspers turned his thoughts to how the German people had allowed the war to continue for so long. He explored his experiences and those of Germany in his 1946 work The Question of German Guilt, a study of how the German populous was led by Hitler and the Nazis.

In 1948, Jaspers relocated to Switzerland, where he taught at the University of Basel. Nietzsche had taught at the same university.

Jaspers died on 26 February 1969, shortly after his eighty-sixth birthday.