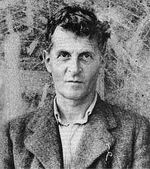 – Language and the world share a common logical form.

– Sentences can show their form but they cannot say it; sentences that attempt to say what can only be shown are pseudo-sentences or nonsense.

– Language consists of ‘language games’ that reflect forms of life.

– For many expressions, the meaning is the use: To grasp the ‘meaning’ of such an expression is to know how to use it.

He has been something of a cult figure but shunned publicity and even built an isolated hut in Norway to live in complete seclusion. His sexuality was ambiguous but he was probably gay; how actively so is still a matter of controversy. His life seems to have been dominated by an obsession with moral and philosophical perfection, summed up in the subtitle of Ray Monk’s excellent biography Wittgenstein: The Duty of Genius.

His concern with moral perfection led Wittgenstein at one point to insist on confessing to several people various sins, including that of allowing others to underestimate the extent of his ‘Jewishness’. His father Karl Wittgenstein’s parents were born Jewish but converted to Protestantism and his mother Leopoldine (nee Kalmus) was Catholic, but her father was of Jewish descent. Wittgenstein himself was baptized in a Catholic church and was given a Catholic burial, although between baptism and burial he was neither a practicing nor a believing Catholic.

The Wittgenstein family was large and wealthy. Karl Wittgenstein was one of the most successful businessmen in the Austro-Hungarian Empire, leading the iron and steel industry there. The Wittgensteins’ home attracted people of culture, especially musicians, including the composer Johannes Brahms, who was a friend of the family. Music remained important to Wittgenstein throughout his life. So did darker matters. Ludwig was the youngest of eight children, and of his four brothers, three committed suicide.

As for his career, Wittgenstein studied mechanical engineering in Berlin and in 1908 went to Manchester, England to do research in aeronautics, experimenting with kites. His interest in engineering led to an interest in mathematics which in turn got him thinking about philosophical questions about the foundations of mathematics. He visited the mathematician and philosopher Gottlob Frege (1848-1925), who recommended that he study with Bertrand Russell (1872-1970) in Cambridge. At Cambridge Wittgenstein greatly impressed Russell and G.E. Moore (1873- 1958), and began work on logic.

When his father died in 1913, Wittgenstein inherited a fortune, which he quickly gave away. When war broke out the next year, he volunteered for the Austrian army. He continued his philosophical work and won several medals for bravery during the war. The result of his thinking on logic was the Tractatus Logico-Philosophicus which was eventually published in 1922 with Russell’s help. This was the only book Wittgenstein published during his lifetime. Having thus, in his opinion, solved all the problems of philosophy, Wittgenstein became an elementary school teacher in rural Austria, where his approach was strict and unpopular, but apparently effective. He spent 1926-28 meticulously designing and building an austere house in Vienna for his sister Gretl.

In 1929 he returned to Cambridge to teach at Trinity College, recognizing that in fact he had more work to do in philosophy. He became professor of philosophy at Cambridge in 1939. During World War II he worked as a hospital porter in London and as a research technician in Newcastle. After the war he returned to university teaching but resigned his professorship in 1947 to concentrate on writing. Much of this he did in Ireland, preferring isolated rural places for his work. By 1949 he had written all the material that was published after his death as Philosophical Investigations, arguably his most important work. He spent the last two years of his life in Vienna, Oxford and Cambridge and kept working until he died of prostate cancer in Cambridge in April 1951. His work from these last years has been published as On Certainty. His last words were, “Tell them I’ve had a wonderful life.”

Ludwig Wittgenstein is one of the most influential philosophers of the twentieth century, and regarded by some as the most important since Immanuel Kant. His early work was influenced by that of Arthur Schopenhauer and, especially, by his teacher Bertrand Russell and by Gottlob Frege, who became something of a friend. This work culminated in the Tractatus Logico-Philosophicus, the only book that Wittgenstein published during his lifetime. It claimed to solve all the major problems of philosophy and was held in especially high esteem by the anti-metaphysical logical positivists.

The Tractatus is based on the idea that philosophical problems arise from misunderstandings of the logic of language, and it tries to show what this logic is. Wittgenstein’s later work, principally his Philosophical Investigations, shares this concern with logic and language, but takes a different, less technical, approach to philosophical problems. This book helped to inspire so-called ordinary language philosophy. This style of doing philosophy has fallen somewhat out of favor, but Wittgenstein’s work on rule-following and private language is still considered important, and his later philosophy is influential in a growing number of fields outside philosophy.