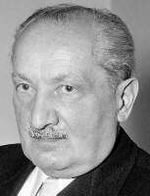 – Although the maning of being is the basic issue for philosophy, its true nature has been forgotten and concealed.

– Human beings are uniquely open to being but must be understood in terms of existential categories rather than traditional, objectifying categories.

– Being can be understood only through a meditative and poetic kind of thinking that is not calculative or objectifying.

– Insofar as being can be conceptualized, it is that which enables beings to be revealed in a dynamic event that conceals even as it reveals.

Heidegger was born on September 26, 1889 in Messkirch in south-west Germany to a Catholic family. His father worked as sexton in the local church. In his early youth Heidegger was being prepared for the priesthood.

In 1903 he went to the high school in Konstanz, where the church supported him by a scholarship, and then, in 1906, he moved to Freiburg. His interest in philosophy first arose during his high school studies in Freiburg when, being seventeen, he read Franz Brentano’s book entitled On the Manifold Meaning of Being according to Aristotle. By his own account, it was this work that inspired his life-long quest for the meaning of being.

In 1909, after completing the high school, he became a Jesuit novice, but was discharged within a month for reasons of health. He then entered Freiburg University where he studied theology. However, a deteriorating health condition and perhaps a lack of a strong spiritual vocation led Heidegger in 1911 to leave the seminary and beak off his training for the priesthood. He took up studies in philosophy, mathematics, and natural sciences. It was also at that time that he first became influenced by Edmund Husserl. He studied Husserl’s Logical Investigations.

In 1913 he completed a doctorate in philosophy with a dissertation on The Doctrine of Judgement in Psychologism under the direction of the neo-Kantian philosopher Heinrich Rickert.

The outbreak of the First World War in 1914 interrupted briefly Heidegger’s academic career. He was enlisted in the army, but after two months released because of health reasons. Hoping to take over the chair of Catholic philosophy at Freiburg, Heidegger now began to work on his habilitation thesis on Duns Scotus’s Doctrine of Categories and Meaning, the second qualifying dissertation that would win him a license to teach at the university. The dissertation was completed in 1915 and in the same year Heidegger became a Privatdozent or unsalaried lecturer.

He taught mostly courses in Aristotelian and scholastic philosophy, and regarded himself as standing in the service of the Catholic world-view. Nevertheless, his turn from theology to philosophy was soon to be followed by another turn. In 1916 he came to know personally Edmund Husserl who joined the Freiburg faculty. Then, in 1917 he married Thea Elfride Petri, a Protestant student who had attended his courses since the fall of 1915.

His career was again interrupted in 1918 when he was called up for active military duty. He served as a weatherman on the western front during the last three months of the war. When he returned to Freiburg, within a few weeks, he announced his break with the “system of Catholicism” (January 9, 1919), got himself appointed as Husserl’s assistant (January 21, 1919), and began lecturing in a new, insightful way (February 7, 1919).

His lectures on phenomenology and his creative interpretations of Aristotle would earn him now a wide acclaim. And yet, Heidegger was not Husserl’s faithful follower. He was not captivated by his master’s later developments – by his neo-Kantian turn towards transcendental subjectivity, and even less by his Cartesian turn – but preferred his earlier work, Logical Investigations. Laboring over the question of the things themselves, he soon began to radically reinterpret Husserl’s phenomenology.

In 1923 Heidegger moved to Marburg University where with the help of Paul Natrop he obtained a position of associate professor. Between 1923 and 1928 he enjoyed there the most fruitful years of his entire teaching. His students testified to the originality of his insight and the intensivity of his philosophical questioning. Heidegger extended the scope of his lectures, and taught courses on history of philosophy, time, logic, phenomenology, Plato, Aristotle, Aquinas, Immanuel Kant, and Gottfried Wilhelm Leibniz. But since 1916 he had published nothing and the lack of publications stood on the way of his further academic career.

Finally, in February 1927, partly because of an administrative pressure, his fundamental, but also unfinished treatise, Being and Time, appeared. Within a few years, this book was recognized as a truly epoch-making work of the 20th century philosophy. It earned Heidegger, in the fall of 1927, the full professorship at Marburg, and one year later, after Husserl’s retirement from teaching, the chair of philosophy at Freiburg University.

Although Being and Time is dedicated to Husserl, upon its publication Heidegger’s departure from Husserl’s phenomenology and the differences between two philosophers became apparent. Next works, published in 1929, “What is Metaphysics?,” “On the Essence of Ground,” and Kant and the Problem of Metaphysics, had further revealed how far Heidegger moved from neo-Kantianism and phenomenology of consciousness to his phenomenological ontology.

Heidegger’s life entered in a new, controversial stage with Hitler’s rise to power. In September 1930, Adolf Hitler’s National Socialist German Workers’ Party (NSDAP) became the second largest party in Germany and on January 30, 1933 Hitler was appointed chancellor of the German Republic. Heidegger, who before was virtually apolitical, in early 1930s become politically involved. On April 21, 1933 he was elected rector of Freiburg University by the faculty, and accepted this politically charged post with the motive, as he later claimed, to resist the political control of the university. On May 3, 1933 he joined the NSDAP party. On May 27, 1933 he delivered his inaugural rector’s address on “The Self-Affirmation of the German University,” whose ambiguous text is frequently interpreted as an expression of his support of Hitler’s regime.

There is a little doubt that during his tenure as rector, Heidegger became instrumental to Nazi policies and, willingly or not, helped to transform the university into National-Socialist mold. And yet, one year later, on April 23, 1934 Heidegger resigned the rectorate and took no further part in politics. His inaugural rector’s address was found incompatible with the party line and its text was eventually banned by the Nazis. There was no trace there of the biologism which sustained nazism, nor of anti-Semitism. Because he was no longer involved in the party’s activity, Heidegger’s membership in the NSDAP became a mere formality. Various restrictions were put on his freedom to publish and attend conferences. In his lectures of the late 1930s and the early 1940s, especially those which he gave during the period in which he was writing Contributions to Philosophy, he expressed covert criticism of Nazi ideology.

For some time he was under surveillance of Gestapo. He was finally humiliated in 1944 when he was declared the most “expendable” member of the faculty and sent to the Rhine to dig trenches. Because of the ambiguity of Heidegger’s attitude toward nazism, the period of his life under Hitler’s regime and the relationship between his philosophy and political involvement are still the subject of controversy and provoke a heated debate. Following Germany’s defeat in the Second World War, Heidegger was in 1945 forbidden to teach and in 1946 dismissed from his chair of philosophy because of alleged Nazi sympathies. The ban was lifted in 1949.

The 1930s are not only marked by Heidegger’s controversial involvement in politics, but also by a change in his thinking which is known as “the turn” (die Kehre). In his lectures and writings that followed “the turn,” he became less systematic and often more obscure than in his fundamental work, Being and Time. He turned to the exegesis of philosophical and literary texts, especially of the Presocratics, but also of Immanuel Kant, Friedrich Hegel, Friedrich Nietzsche and Hölderlin, and makes this his way of philosophizing. A recurring theme of that time was “the essence of truth.”

During the decade between 1931 and 1940, Heidegger offered five courses under this title. His preoccupation with the question of language and his fascination with poetry were expressed in lectures on Hörderlin which he gave between 1934 and 1936. Towards the end of 1930s and the beginning of 1940s, he taught five courses on Nietzsche, in which he submitted to criticism the tradition of western metaphysics, described by him as nihilistic, and made allusions to the absurdity of war and the bestiality of his contemporaries.

Finally, his reflection upon western philosophical tradition and an endeavor to open a space for philosophizing outside it, brought him to Presocratic thought. In the course of lectures entitled “An Introduction to Metaphysics,” offered in the summer semester of 1935, and published in 1953, which can be seen as a bridge between earlier and later Heidegger, the Presocratics were no longer a subject of mere passing remarks as in Heidegger’s earlier works.

The course was not about early Greek though; and yet, the Presocratics became there the pivotal center of discussion. It is clear that with the evolution of Heidegger’s thinking in the 1930s, they gained in importance in his work. During the 1940s, in addition to giving courses on Aristotle, Kant and Hegel, Heidegger lectured extensively on Anaximander, Parmenides, and Heraclitus.

During the last three decades of his life, from the mid 1940s to the mid 1970s, Heidegger wrote and published much, but in comparison to earlier decades, there was no significant change in his philosophy. In his insightful essays and lectures, he addressed different issues concerning modernity, labored on his original philosophy of history – the history of being, and attempted to clarify his way of thinking after the turn.

Most of his time was divided between his home in Freiburg, his second study in Messkirch, and his mountain hut in the Black Forest. But he escaped provincialism, by being frequently visited by his friends, including, among the others, the political philosopher Hannah Arendt, the physicist Werner Heisenberg, the theologian Rudolf Bultmann, the psychologist Ludwig Binswanger, and by traveling more widely than ever before.

He lectured on “What is Philosophy?” at Cerisy-la-Salle in 1955, and on “Hegel and the Greeks” at Aix-en-Provence in 1957. He visited Greece in 1962, and again in 1967. In 1966, Heidegger attempted to justify his political involvement during the Nazi regime in an interview with Der Spiegel entitled “Only a God Can Save Us.” It was published only ten years later, after his death. One of his last teaching assignments was his seminar on Parmenides which he offered in Zähringen in 1973.

Heiddegger died on May 26, 1976 and was buried in the churchyard at Messkirch. To the very end he worked on various projects, including the extensive Gesamtausgabe, the complete edition of his works.

Martin Heidegger is acknowledged to be one of the most original and important philosophers of the 20th century, but also the most controversial. His thinking has contributed to such diverse fields as phenomenology (Merleau-Ponty), existentialism (Sartre, Ortega y Gasset), hermeneutics (Gadamer, Ricoueur), political theory (Arendt, Marcuse), psychology (Boss, Binswanger, Rolo May), theology (Bultmann, Rahner, Tillich), and postmodernism (Derrida). His main concern was ontology or the study of being. In his fundamental treatise, Being and Time, he attempted to access being (Sein) by means of phenomenological analysis of human existence (Dasein) in respect to its temporal and historical character.

In his later works Heidegger had stressed the nihilism of modern technological society, and attempted to win western philosophical tradition back to the question of being. He placed an emphasis on language as the vehicle through which the question of being could be unfolded, and on the special role of poetry. His writings are notoriously difficult. Being and Time remains still his most influential work.