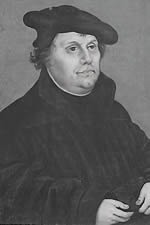 – Human nature is corrupt, weak, self-centered, and in a state of rebellion from God; the fruit of the fall from grace is death.

– God’s laws show sinners their distance from God and arouse a desire for redemption.

– Although God in his justice could condemn humanity, he chooses out of love to redeem sinners; this love os most fully manifest on the cross.

– In the process of redemption one can do nothing but have faith, an absolute trust and response to God’s words; human merit and good works are rejected.

– The foremost vehicle of God’s saving word is the Bible, which presents the whole of the good news for human salvation.

– The Catholic priesthood, monasticism, and canon law are rejected as human institutions that make the false claim to control the spirit of God.

– The sacraments are signs that communicate God’s saving word.

Martin Luther, an Augustinian priest, biblical scholar, and linguist, was born and died in Eisleben, Saxony, a duchy in northwestern Germany. His attack on ecclesiastical abuses, the Ninety-five Theses, signaled the beginning of the Protestant Reformation. Luther’s father wanted him to be a lawyer and sent him to the University of Erfut, where he received a B.A. degree in 1502 and an M.A. in 1505. Luther joined the Augustinian order in 1506 and was ordained a priest a year later. Like other German Augustinians of this era, Luther sought a stricter observance of the rules of the order and this was reflected in his teaching and writing. Luther taught at the new University of Wittenberg from 1508 to 1546 and received a doctorate of theology in 1512.

Like Saint Augustine, the founder of his order, Luther was racked by self-doubt and the uncertainty of his own salvation. Particularly troubling to him was the nature of divine justice. Luther’s reading of Augustine and Saint Paul led him to conclude that God’s justice lay in his punishment of sin. Further, his reading of the Gospels convinced him that God demanded more than outward obedience (conformity to the law); he also wanted love and inner purity, all this under pain of divine justice. In this scheme, however, God was more easily feared than loved, which seemed to be in conflict with the spirit of Christianity. Moreover, Luther was tormented with self-doubt about his own ability to fulfill God’s expectations. His participation in the rituals of the Catholic church did nothing to alleviate his anguish, and he came to believe that something was fundamentally wrong with the church as governed by Rome.

The essence of Luther’s rebellion lay in his doctrine of justification by faith. He came to believe that faith was not the product of man’s fear of divine justice; rather, divine justice (justification) came through true faith, and salvation (divine grace) was the just reward for faith. Divine justice, then, was not related to punishment but was a positive, loving act. This view fit with Luther’s understanding of Christianity and became the essence of Reformation theology. Other reforms such as the number and significance of the sacraments and the role of the clergy sprang from Luther’s interpretation of the Bible.

Luther’s reflections became public and touched off the Reformation when he posted his famous Ninety-five Theses on the door of All Saints Church in Wittenberg on October 31, 1517. The Theses were Luther’s reaction to such corrupt church practices as selling indulgences, and to such questionable practices as the veneration of relics and saints. Although the Theses did not deny papal prerogative, they did criticize papal policy by implication. The Theses also did not attack such established teachings as purgatory, but they did stress the spiritual, inward character of the Christian religion. During the religious and political fight that followed the publication of the Theses, Luther was excommunicated (1521), his views condemned, and a new order independent of the Papacy was born. The widespread publication of the Theses (made possible by the recently invented printing press) transformed what might once have been a mere local issue into a controversy that consumed Europe. The Protestant Reformation triggered by this controversy soon spread over northern Europe, sparking a war that lasted thirty years and a religious movement that had a global influence.