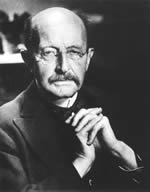 – The energy of electromagnetic radiation (such as light, X-rays, and ratio waves) is found only in discrete packets of fine size: quanta.

Max Karl Ernst Ludwig Planck was born in Kiel, Germany, on April 23, 1858, the son of Julius Wilhelm and Emma Planck. His father was Professor of Constitutional Law in the University of Kiel, and later in Göttingen.

Planck studied at the Universities of Munich and Berlin, where his teachers included Kirchhoff and Helmholtz, and received his doctorate of philosophy at Munich in 1879. He was Privatdozent in Munich from 1880 to 1885, then Associate Professor of Theoretical Physics at Kiel until 1889, in which year he succeeded Kirchhoff as Professor at Berlin University, where he remained until his retirement in 1926. Afterwards he became President of the Kaiser Wilhelm Society for the Promotion of Science, a post he held until 1937. The Prussian Academy of Sciences appointed him a member in 1894 and Permanent Secretary in 1912.

Planck’s earliest work was on the subject of thermodynamics, an interest he acquired from his studies under Kirchhoff, whom he greatly admired, and very considerably from reading R. Clausius’ publications. He published papers on entropy, on thermoelectric ity and on the theory of dilute solutions.

At the same time also the problems of radiation processes engaged his attention and he showed that these were to be considered as electromagnetic in nature. From these studies he was led to the problem of the distribution of energy in the spectrum of full radiation. Experimental observations on the wavelength distribution of the energy emitted by a black body as a function of temperature were at variance with the predictions of classical physics. Planck was able to deduce the relationship between the ener gy and the frequency of radiation. In a paper published in 1900, he announced his derivation of the relationship: this was based on the revolutionary idea that the energy emitted by a resonator could only take on discrete values or quanta. The energy for a resonator of frequency v is hv where h is a universal constant, now called Planck’s constant.

This was not only Planck’s most important work but also marked a turning point in the history of physics. The importance of the discovery, with its far-reaching effect on classical physics, was not appreciated at first. However the evidence for its validi ty gradually became overwhelming as its application accounted for many discrepancies between observed phenomena and classical theory. Among these applications and developments may be mentioned Einstein’s explanation of the photoelectric effect.

Planck’s work on the quantum theory, as it came to be known, was published in the Annalen der Physik. His work is summarized in two books Thermodynamik (Thermodynamics) (1897) and Theorie der Wärmestrahlung (Theory of heat radiat ion) (1906).

He was elected to Foreign Membership of the Royal Society in 1926, being awarded the Society’s Copley Medal in 1928.

Planck faced a troubled and tragic period in his life during the period of the Nazi government in Germany, when he felt it his duty to remain in his country but was openly opposed to some of the Government’s policies, particularly as regards the persecuti on of the Jews. In the last weeks of the war he suffered great hardship after his home was destroyed by bombing.

He was revered by his colleagues not only for the importance of his discoveries but for his great personal qualities. He was also a gifted pianist and is said to have at one time considered music as a career.

Planck was twice married. Upon his appointment, in 1885, to Associate Professor in his native town Kiel he married a friend of his childhood, Marie Merck, who died in 1909. He remarried her cousin Marga von Hösslin. Three of his children died young, leaving him with two sons.

He suffered a personal tragedy when one of them was executed for his part in an unsuccessful attempt to assassinate Hitler in 1944.

– Collections of essays and lectures: A Survey of Physical Theory (1920)
– The Philosophy of Physics (1936)
– Scientific Autobiography and Other Papers (1949)