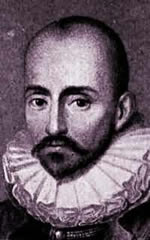 – An acceptance of the duality of the human condition (man’s spiritual aspirations counterbalanced by the physical limitations of the body) enables man to pursue the masterpiece of living well.

– A life committed to moderation is superior to one that has allowed excesses and extremes.

– The senses through which man knows the world are imperfect and limit his ability to claim knowledge of anything (God alone is omniscient).

– Man’s ability to say definitively either ‘I know’ or ‘I do not know’ leads to an interrogative formula, ‘What do I know?’ to reflect the cautious suspension of judgement man must consider.

– All living things, including human beings, are in a state of constant flux; being consists of movement and action.

– Study of the self is man’s primary duty and responsibility.

Michel de Montaigne was born in Chateau de Montaigne, near Bordeaux, France. He received his early education at the College de Guyenne in Bordeaux and studied law at Bordeaux and Toulouse, becoming a counselor of the Court des Aides of Perigueaux, the Bordeaux Parliament and, in 1561, at the court of Charles IX.

In 1565, Montaigne married Francoise de la Chassaigne. They raised one daughter, with four other children dying in infancy.

He lived the life as a country gentleman and traveled extensively through Switzerland, Germany, and Italy.

Montaigne was a moderate Roman Catholic and an advocate of toleration, acting as an intermediary between Henry of Navarre and the court party. As a result, in 1588, he was arrested by members of the Protestant League and thrown into the Bastille for several hours.

His work Essais established the essay as a new literary form and influenced both French and English writers; it was quoted by William Shakespeare and imitated by Francis Bacon.

Michel de Montaigne died on September 13, 1592 at his chateau in France.