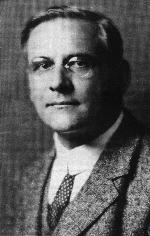 Moritz Schlick, the founder of the Vienna Circle, was born on April 14, 1882 in Berlin.

After studying in both Heidelberg and Lausanne, he returned to Berlin to complete his doctorate in physics under the direction of Max Planck.

Schlick then held teaching positions at the universities of Rostock and Kiel before taking the position of Professor of the Philosophy of Inductive Science at the University of Vienna in 1922.

Schlick, in a similar fashion to Ernst Mach and Ludwig Boltzmann, his predecessors at Vienna, had grave doubts in philosophy based on metaphysics. He founded the Vienna Circle with other scientists and philosophers such as Rudolf Carnap and Otto Neurath, as a forum for discussions toward a new direction of philosophy; one that moved away from metaphysics and focused on empiricism.

Influenced by philosophers such as Ludwig Wittgenstein and Bertrand Russell, the Vienna Circle helped formulate the beginnings of logical positivism.

Schlick helped advance ideas in the logic of science and ethics, as well as the philosophy of life and culture. He was interested in creating a theory of knowledge based on empirical evidence and symbolic logic. He strongly believed that direct observation was the only way to verify factual knowledge, thus renouncing a priori knowledge. Schlick was a prolific essayist, contributing to the abundance of publications coming out of the Vienna Circle. The sheer amount of writing from the group opened their ideas to many other countries and gave Schlick the opportunity to be a visiting professor at Stanford University in 1929. During his time in the United States, he gave lectures in many cities, thus opening up the ideas of logical positivism even further.

The remainder of Schlick’s life was spent in Vienna, where he continued to advance the philosophy of science. Through his improvisational-style lectures, Schlick was able to create for his students the relationship between expression and knowledge. This lecture style allowed Schlick to actually perform logical empiricism before his students; a unique idea that unfortunately was never able to fully develop due to his sudden and violent death.

On June 22, 1936, Schlick was shot and killed by a mentally insane student.

After his death, the Vienna Circle. ceased to meet, abruptly ending an era in Vienna. It was Schlick’s insight though, that created one of the most influential and lasting schools of thought in the 20th century.