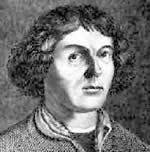 – The earth is not at the center of the universe.

– The apparent loops that the planets make in their motions across the heavens are not real motions; they are mere appearances, caused by our position on the earth and the earth’s motion around the sun relative to the other planets.

– The appearance of the heavens’ rotation about the earth is due to the fact that we are on the earth’s surface and the earth is rotating about its axis once every twenty-four hours.

– It is imprudent for government to allow to different currencies to circulate at the same time; if bad money circulates along with the good, the good money will soon disappear and only the bad will be left.

Born Poland 1473, proposed that the earth and planets moved in circular orbits around the Sun, died 1543.

The greatest of many of Nicholas Copernicus’ achievements was proposing that the earth and planets moved in circular orbits around the Sun. It is not certain what motivated him to adopt this view, but he was known to have studied the Pythagorean tradition (which had generated the heliocentric viewpoint of Aristarchus).

Copernicus went beyond Aristarchus in at least one respect: he did not believe the Sun, or any other heavenly body, was the centre of the universe.

The Nicholas Copernicus biography might have been a short one if he had not kept his views secret until he was on his death bed. The Church burned Giordano Bruno at the stake for holding similar views. His main work De revolutionibus orbium celestium (‘On the Revolutions of the Heavenly Spheres’) had little impact for several decades after his death. Like Aristarchus’ original, the Copernican system was less accurate than Ptolemy’s geocentric system because it employed a simple circular orbit for each planet.

Copernicus predicted orbits were not matched by observations. It took Johannes Kepler’s calculations and Galileo Galilei’s observations to provide conclusive proof of a Sun-centred solar system.

Another of Nicholas Copernicus’ accomplishments was explaining the precession of the equinoxes from observations of long term changes in the direction of the axis.