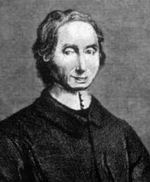 – We see all things in God.

– The world of intelligible extension exists only in God is coeternal with God.

– To be is to be conceived.

– All that we are aware of are ideas and feelings.

– We have no direct or indirect knowledge of an external physical world.

– God is the sole efficacious cause of all events; there are no secondary causes; so-called causal sequences are just occasions of God’s acting.

– There is no interaction between mind and matter.

– There is no necessary connection between events.

Nicholas Malebranche was the most influential and original of the Cartesian philosophers.

Deformed and sickly, Malebranche was born in Paris and from his childhood preferred solitude.

He studied theology at the Sorbonne, and at age 22 entered the Congregation of the Oratory where he spent the rest of his life in seclusion. He was ordained in 1664 and the same year became acquainted with Descartes’ Treatise on Man, an unfinished work which explores the relation between the human mind and body. He subsequently devoted his studies to Cartesian philosophy and science and four years later published his greatest work, The Search After Truth (1674-1675).

In response to theological criticisms of this work he soon after published his Treatise of Nature and Grace, which attempts to reconcile God’s power, knowledge, and goodness with the evil in the world. This work embroiled him in even more controversy, particularly with French Bishop Jacques Benigne Bossuet and French theologian Antoine Arnauld.

Malebranche’s other philosophical writings include Dialogues on Metaphysics and on Religion (1688), a work in fourteen dialogs which more informally covers much of the ground in his Search after Truth, and A Treatise of Morality (1683). In 1699 he was elected to the Academie des Sciences for his scientific writings.

Near the end of his life, similarities between his views of God and those of Baruch Spinoza led to accusations that he followed Spinoza’s heretical system. He defended himself against these charges in various letters and writings.

Two aspects of Malebranche’s philosophy have been especially influential in the history of philosophy:

(1) that we see all things through God, and

Both of these doctrines are discussed below. As to the first of these, Malebranche was concerned with explaining how our minds get perceptual images of external objects.

His final answer to the question is that, within himself, God contains images of all external things, and God implants these ideas in our mind at the appropriate time. Thus, we see external objects by viewing their images as they reside in God.