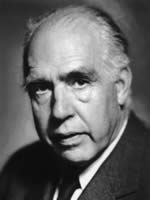 – The electrons that surround the nucleus of an atom can only occupy certain dscrete states – those states being defined by Planck’s constant, h. ‘In-between’ states are not permissible.

– The configuration of electrons in an atom is the primary factor that determines the chemical properties of an element.

– Quantum mechanical descriptions of the states of atoms should be considered the most complete possible descriptions.

– The classical ideal of complete causal explanation of any phenomenon is impossible to reach and should be abandoned in favor of statistical explanation.

Niels Henrik David Bohr was born in Copenhagen on October 7, 1885, as the son of Christian Bohr, Professor of Physiology at Copenhagen University, and his wife Ellen, née Adler. Niels, together with his younger brother Harald (the future Professor in Mathematics), grew up in an atmosphere most favourable to the development of his genius – his father was an eminent physiologist and was largely responsible for awakening his interest in physics while still at school, his mother came from a family distinguished in the field of education.

After matriculation at the Gammelholm Grammar School in 1903, he entered Copenhagen University where he came under the guidance of Professor C. Christiansen, a profoundly original and highly endowed physicist, and took his Master’s degree in Physics in 1909 and his Doctor’s degree in 1911.

While still a student, the announcement by the Academy of Sciences in Copenhagen of a prize to be awarded for the solution of a certain scientific problem, caused him to take up an experimental and theoretical investigation of the surface tension by means of oscillating fluid jets. This work, which he carried out in his father’s laboratory and for which he received the prize offered (a gold medal), was published in the Transactions of the Royal Society, 1908.

Bohr’s subsequent studies, however, became more and more theoretical in character, his doctor’s disputation being a purely theoretical piece of work on the explanation of the properties of the metals with the aid of the electron theory, which remains to this day a classic on the subject. It was in this work that Bohr was first confronted with the implications of Planck’s quantum theory of radiation.

In the autumn of 1911 he made a stay at Cambridge, where he profited by following the experimental work going on in the Cavendish Laboratory under Sir J.J. Thomson’s guidance, at the same time as he pursued own theoretical studies. In the spring of 1912 he was at work in Professor Rutherford’s laboratory in Manchester, where just in those years such an intensive scientific life and activity prevailed as a consequence of that investigator’s fundamental inquiries into the radioactive phenomena. Having there carried out a theoretical piece of work on the absorption of alpha rays which was published in the Philosophical Magazine, 1913, he passed on to a study of the structure of atoms on the basis of Rutherford’s discovery of the atomic nucleus.

By introducing conceptions borrowed from the Quantum Theory as established by Planck, which had gradually come to occupy a prominent position in the science of theoretical physics, he succeeded in working out and presenting a picture of atomic structure that, with later improvements (mainly as a result of Heisenberg’s ideas in 1925), still fitly serves as an elucidation of the physical and chemical properties of the elements.

Recognition of his work on the structure of atoms came with the award of the Nobel Prize for 1922.

Bohr’s activities in his Institute were since 1930 more and more directed to research on the constitution of the atomic nuclei, and of their transmutations and disintegrations. In 1936 he pointed out that in nuclear processes the smallness of the region in which interactions take place, as well as the strength of these interactions, justify the transition processes to be described more in a classical way than in the case of atoms (Cf. »Neutron capture and nuclear constitution«, Nature, 137 (1936) 344).

A liquid drop would, according to this view, give a very good picture of the nucleus. This so-called liquid droplet theory permitted the understanding of the mechanism of nuclear fission, when the splitting of uranium was discovered by Hahn and Strassmann, in 1939, and formed the basis of important theoretical studies in this field (among others, by Frisch and Meitner).

Bohr also contributed to the clarification of the problems encountered in quantum physics, in particular by developing the concept of complementarily. Hereby he could show how deeply the changes in the field of physics have affected fundamental features of our scientific outlook and how the consequences of this change of attitude reach far beyond the scope of atomic physics and touch upon all domains of human knowledge. These views are discussed in a number of essays, written during the years 1933-1962. They are available in English, collected in two volumes with the title Atomic Physics and Human Knowledge and Essays 1958-1962 on Atomic Physics and Human Knowledge, edited by John Wiley and Sons, New York and London, in 1958 and 1963, respectively.

Among Professor Bohr’s numerous writings (some 115 publications), three appearing as books in the English language may be mentioned here as embodying his principal thoughts: The Theory of Spectra and Atomic Constitution, University Press, Cambridge, 1922/2nd. ed., 1924; Atomic Theory and the Description of Nature, University Press, Cambridge, 1934/reprint 1961; The Unity of Knowledge, Doubleday & Co., New York, 1955.

During the Nazi occupation of Denmark in World War II, Bohr escaped to Sweden and spent the last two years of the war in England and America, where he became associated with the Atomic Energy Project. In his later years, he devoted his work to the peaceful application of atomic physics and to political problems arising from the development of atomic weapons. In particular, he advocated a development towards full openness between nations. His views are especially set forth in his Open Letter to the United Nations, June 9, 1950.

Until the end, Bohr’s mind remained alert as ever; during the last few years of his life he had shown keen interest in the new developments of molecular biology. The latest formulation of his thoughts on the problem of Life appeared in his final (unfinished) article, published after his death: “Licht und Leben-noch einmal”, Naturwiss., 50 (1963) 72: (in English: “Light and Life revisited”, ICSU Rev., 5 ( 1963) 194).

Professor Bohr was married, in 1912, to Margrethe Nørlund, who was for him an ideal companion. They had six sons, of whom they lost two; the other four have made distinguished careers in various professions – Hans Henrik (M.D.), Erik (chemical engineer), Aage (Ph.D., theoretical physicist, following his father as Director of the Institute for Theoretical Physics), Ernest (lawyer).