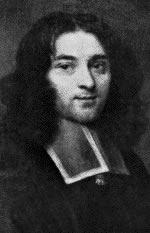 – All theories – philosophical, theological, and even scientific – can be challenged by arguments that show they are contradictory and/or unbelievable.

– Since no beliefs can be proved to be true or false, all should be tolerated.

– Morality is completely separate from religious belief; a society of atheists could be more moral than a society of Christians.

– Careful unprejudiced erudition and exact reasoning are needed to eliminate the errors of the past and present.

– Within a Christian frame of reference there is no way of explaining the existence of evil.

Born in 1647, the son of a protestant minister, Pierre Bayle wrote his first philosophical text as a student in the Jesuit college of Toulouse, a few months after his conversion to Catholicism (1669). But he returned to the religion of his fathers as soon as he finished his philosophy year. He moved then to Geneva, where he remained until 1673.

In 1675, Bayle became professor of philosophy at the Calvinist academy of Sedan, where he wrote his handbook of philosophy and the Objections against the Cartesian Pierre Poiret (1679). Having left Sedan shortly before the suppression of the Academy, Bayle moved to Rotterdam, where he taught history and philosophy at the Ecole illustre. In 1682 he published the Pensées diverses sur la comète, a subtle analysis of popular superstition, followed one year later by the Critique générale de l’histoire du calvinisme de M. Maimbourg, a strong defence of French protestantism, which was condemned by Catholic authorities and burnt in the place de Grève in Paris.

In 1684, Bayle founded the Nouvelles de la République des Lettres, the most influential literary and philosophical review of that time. After the revocation of the Edict of Nantes (1685), he strongly attacked religious intolerance and defended the “rights of the erring conscience” in his Commentaire philosophique (1686). The work was condemned by all Protestant theologians, including the orthodox Pierre Jurieu and the moderate Elie Saurin; they both looked at it as an eulogy of religious disbelief.

In 1690, Bayle published the Avis aux réfugiés, a sharp critique of the political attitude of French Protestant refugees in Holland. Bayle was reported by Jurieu to the religious and political authorities of Rotterdam, who dismissed him from his charge at the Ecole illustre. From then on, Bayle gave up any form of political engagement, and dedicated himself to a new project: the writing of the Dictionnaire historique et critique, his most famous work, which appearead at the end of 1696.

Bayle’s late years were devoted to a new edition of the Dictionnaire (1702) and to harsh controversies with theologians such as Jean Le Clerc, Isaac Jaquelot and Jaques Bernard. In the Continuation des pensées diverses (1704), Bayle showed the impossibility of answering the atheists’ objections against theology, both from a moral and a theoretical point of view.

He died in Rotterdam in 1706, declaring again his faith in God’s goodness and mercy.