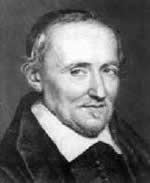 – Aristotelianism is useless as a philosophy or basis for science.

– Skepticism, in a mitigated form, allows for a limited knowledge.

– Epicurean atomism is the best hypothesis for explaining the natural world.

– Epicureanism can be modified so that it is compatible with Christian beliefs.

Pierre Gassendi was a French philosopher, scientist and mathematician, best known for attempting to reconcile Epicurean atomism with Christianity.

He was born of poor parents at Champtercier, near Digne. At a very early age he showed remarkable mental powers and attended the college at Digne. He showed particular aptitude for languages and mathematics, and the college allegedly invited him to lecture on rhetoric at the age of sixteen. Soon afterwards he entered the University of Aix-en-Provence, to study philosophy under P Fesaye. In 1612 the college of Digne called him to lecture on theology. Four years later he received the degree of doctor of theology at Avignon, and in 1617 he took holy orders. In the same year he answered a call to the chair of philosophy at Aix University, and seems gradually to have withdrawn from theology.

He lectured principally on the Aristotelian philosophy, conforming as far as possible to the orthodox methods. At the same time, however, he followed with interest the discoveries of Galileo and Kepler, and became more and more dissatisfied with the Peripatetic system. The period of revolt against the Aristotelianism of the schools had begun, and Gassendi shared to the full the empirical tendencies of the age. He too began to draw up objections to the Aristotelian philosophy, but did not at first venture to publish them. In 1624, however, after he had left Aix for a canonry at Grenoble, he printed the first part of his Exercitationes paradoxicae adversus Aristoteleos. A fragment of the second book later appeared in print at La Haye (1659), but Gassendi never composed the remaining five, apparently thinking that the Discussiones Peripateticae of Francesco Patrizzi left little scope for his labours.

After 1628 Gassendi travelled in Flanders and in Holland. During this time he wrote, at the instance of Marin Mersenne, his examination of the mystical philosophy of Robert Fludd (Epistolica Exercitatio, in qua precipua principia philosophiae Roberti Fluddi deteguntur, 1631), an essay on parhelia (Epistola de parheliis), and some valuable observations on the transit of Mercury which Kepler had foretold. He returned to France in 1631, and two years later became provost of the cathedral church at Digne.

In 1631, Gassendi became the first person to observe the transit of a planet across the Sun, viewing the transit of Mercury which Kepler had predicted.

Gassendi then spent some years travelling through Provence with the duke of Angoulême, governor of the region. During this period he wrote only the one literary work, his Life of Peiresc, which has has received frequent reprintings and an English translation. In 1642 Mersenne engaged him in controversy with René Descartes. His objections to the fundamental propositions of Descartes appeared in print in 1642; they appear as the fifth in the series contained in the works of Descartes. Gassendi’s tendency towards the empirical school of speculation appears more pronounced here than in any of his other writings.

In 1645 he accepted the chair of mathematics in the Collège Royal at Paris, and lectured for many years with great success. In addition to controversial writings on physical questions, there appeared during this period the first of the works for which historians of philosophy remember him. In 1647 he published the well-received treatise De vita, moribus, et doctrina Epicuri libri octo. Two years later appeared his commentary on the tenth book of Diogenes Laërtius, De vita, moribus, et placitis Epicuri, seu Animadversiones in X. librum Diog. Laër. (Lyons, 1649; last edition, 1675). In the same year he had published the more important Syntagma philosophiae Epicuri (Lyons, 1649; Amsterdam, 1684).

In 1648 ill-health compelled him to give up his lectures at the Collège Royal. He travelled in the south of France, spending nearly two years at Toulon, the climate of which suited him. In 1653 he returned to Paris and resumed his literary work, publishing in that year lives of Copernicus and of Tycho Brahe. The disease from which he suffered, a lung complaint, had, however, established a firm hold on him. His strength gradually failed, and he died at Paris. A bronze statue of him was erected by subscription at Digne in 1852.