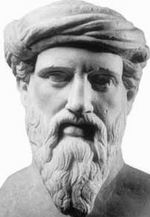 Pythagoras was born on the island of Samos, Greece in 569 BC.

He was a Greek religious leader and a philosopher who made developments in astronomy, mathematics, and music theories.

He moved to Croton (a city in southern Italy) and started a religious and philosophical school there.

He had many followers called the Pythagoreans.

Pythagoras did much more than just discover what is now referred to as the Pythagorean Theorem. Pythagoras and his followers contributed to music, astronomy and mathematics. Pythagoras believed in secrecy and communalism, so distinguishing his work from the work of his followers is almost impossible. When joining Pythagoras’s group, you had to remain silent for five years before you could contribute to the group. Some of their discoveries were right, and some were proven wrong in time.

The most important idea of the Pythagoreans was that most things could be understood through math, which was important to math and science development.

Pythagoras or his students proved the converse theorem, though it was used much earlier in Egypt.

Pythagoras died about 475 BC in Metapontum, Lucania.