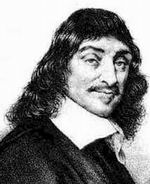 – The method for the discovery of truth is analytic and consists of four rules: 1. Accept nothing as true except what can be clearly perceived to be so and nothing more than can be perceived so clearly and distinctly that one cannot have occasion to doubt it, 2. Divide up each problem into as many parts as possible and resolve each in the best manner possible, 3. Carry on one’s reflections in due order, beginning with the most simple and proceed little by little, or by degrees, to knowledge of the most complex, 4. Make enumerations so complete and reviews so general that one can be certain of omitting nothing.

– ‘I think, therefore I am’ (I think, I am) is perceived as true every time a mind thinks.

– The cause must be as perfect or more perfect than the effect.

– God is the supremely perfect and consequently eternal and necessarily existent and creative substance.

– With the exception of the creative and sustaining power of God, no substance needs another in order to exist.

Descartes was born in a village near Tours in France in 1596.

He was educated at a Jesuit college which was firmly grounded in the scholastic tradition, and by no means adverse to the study of either the humanities, or science. At the school he was given privileges similar to those enjoyed by boys of noble birth, but on the grounds of his fragile health. Descartes studied a broad range of subjects, and excelled particularly in mathematics. It is clear he benefited greatly from this Jesuit education, yet Descartes (in common with many intellectuals of his time) was keen to stress the separation of reason and faith. This meant that he could be skeptical concerning the philosophical and theological positions taken by the Church, while maintaining his Catholic faith.

After taking a degree in law from Poitier, Descartes enlisted in the Dutch and, later, the Bavarian militaries. By 1619, under the influence of the Dutch mathematician and scientist Beeckman, Descartes began his exceptionally fertile mathematical studies of natural phenomena. Also around 1619, Descartes may have begun the unfinished Rules for the Direction of the Mind which was his first major philosophical treatise on the proper method for pursuing either science or rational theology. Over the next decade, Descartes alternated spending time in Paris with the circle of mathematicians and physicists gathered around the figure of Father Mersenne, and travelling widely. In 1629 Descartes moved to Holland where he lived in seclusion for 20 years, only occasionally returning to France, and changing his residence frequently to preserve his privacy.

The scientific and technical studies of these years resulted in the three texts on optics, meteorology and geometry, which were only published in 1637, and ‘The World’ which was published posthumously. Nevertheless, Descartes was establishing quite a reputation as a forbidable mathematician. Descartes made a number of important contributions to mathematics and physics, among the most enduring of which was his foundation (with Galileo) of what is now known as analytic geometry. That is, broadly speaking, the use of geometrical analysis to solve complex algebraic problems, and vice versa. It is difficult to overestimate the importance for the history of mathematical physics of this bringing together of the sciences of geometry and algebra.

With the exception of parts of the Rules and a few fragments, most of Descartes’ early ‘metaphysical’ writings are lost. It was after he moved to Amsterdam that Descartes began working in earnest on the philosophical ideas upon which his fame now rests. The Discourse on the Method was published in 1637, together with the three treatises mentioned above. And in 1640, he enlarged upon the metaphysical issues therein, writing his Meditations on First Philosophy. The full title of this work is Meditations on the First Philosophy: In Which the Existence of God and the Distinction Between Mind and Body are Demonstrated. The work was first published in 1641 in Latin and was translated into French in the following year by the Duc de Luynes.

In 1649, Descartes moved to Stockholm at the request of Queen Christina of Sweden who employed him as a philosophy tutor. Christina scheduled the lectures at 5 A.M. The early hours and harsh climate took their toll on Descartes’s already weakened condition.

During his life, Descartes’s fame rose to such an extent that (despite the theological controversies centering on him) many Catholics believed he would be a candidate for sainthood.

As his body was transported from Sweden back to France, anxious relic collectors along the path removed pieces of his body. By the time his body reached France, it was considerably reduced in size.

Descartes’ philosophy developed in the context of the key features of Renaissance and early modern philosophy. Like the humanists, he rejected religious authority in the quest for scientific and philosophical knowledge.

Although Descartes was a devout Catholic, he was also influenced by the Reformation’s challenge to Church authority, particularly the challenge against medieval Aristotelianism. Nevertheless, Descartes’ philosophical vocabulary is heavily determined by scholastic thought – Descartes was happy to borrow ideas or principles where he felt they were not against clear reasoning.

For Descartes, reason was both the foundation and guide for pursuing truth. He was an active participant in the scientific revolution in both scientific method and in particular discoveries. Finally, and perhaps most importantly, Descartes reacted strongly against the Renaissance resurgence of ancient Greek skepticism. Thus, we find in Descartes’ writings a relentless pursuit of absolute certainty.

Descartes was hugely influential on individual, and key, philosophers throughout the 17th and 18th Centuries (e.g. Baruch Spinoza, Nicolas Malebranche, John Locke, Gottfried Wilhelm Leibniz). His insistence on a radical philosophy that dispensed, as far as possible, with authority; his insistence on the perspective of consciousness in epistemology; his attempt to raise the standard of philosophical argumentation to a science akin to geometry; his close integration of philosophy and physical science; his emphasis on methodology, all were hugely important.

Even philosophers who rejected his thought spent a great deal of time and energy doing so – Descartes could not be ignored. Though Descartes’ mathematical works were unquestionably important, the particulars of his physics were less so. And yet Descartes’ general physics – the rational justification for a universal, mathematical/ quantitative understanding of nature – was hugely significant. However, despite all these influences, his philosophical and scientific work never became the ‘official’ new philosophy, as he had hoped it would.

First, it suffered condemnation, usually on religious grounds; this began already during Descartes’ lifetime, and his work was officially ‘prohibited’ in 1663 by the Church in Rome. Then, by the early 18th Century, it suffered the double blow of the rise of empirically-minded approaches in Britain and France, together with the triumph of Newtonian physics pretty much everywhere.

The following article will provide an overview of the majority of Descartes’ philosophical ideas. For convenience, we will follow the order and structure of his most famous and widely-read book, the Meditations on First Philosophy. The fame and influence of this small book makes it unavoidable as a guide to Descartes’ thought. However, along the way and where appropriate, a number of philosophical issues or alternative approaches from other key texts will be introduced.

He attempted to restart philosophy in a fresh direction. For example, his philosophy refused to accept the Aristotelian and Scholastic traditions that had dominated philosophical thought throughout the Medieval period; it attempted to fully integrate philosophy with the ‘new’ sciences; and Descartes changed the relationship between philosophy and theology. Such new directions for philosophy made Descartes into a revolutionary figure.

The two most widely known of Descartes’ philosophical ideas are those of a method of hyperbolic doubt, and the argument that, though he may doubt, he cannot doubt that he exists. The first of these comprises a key aspect of Descartes’ philosophical method. As noted above, he refused to accept the authority of previous philosophers – but he also refused to accept the obviousness of his own senses. In the search for a foundation for philosophy, whatever could be doubted must be rejected. He resolves to trust only that which is clearly and distinctly seen to be beyond any doubt. In this manner, Descartes peels away the layers of beliefs and opinions that clouded his view of the truth. But, very little remains, only the simple fact of doubting itself, and the inescapable inference that something exists doubting, namely Descartes himself.

His next task is to reconstruct our knowledge piece by piece, such that at no stage is the possibility of doubt allowed to creep back in. In this manner, Descartes proves that he himself must have the basic characterisitc of thinking, and that this thinking thing (mind) is quite distinct from his body; the existence of a God; the existence and nature of the external world; and so on. What is important in this for Descartes is, first, that he is showing that knowledge is genuinely possible (and thus that sceptics must be mistaken), and, second, that, more particularly, a mathematically-based scientific knowledge of the material world is possible.

Descartes’ work was influential, although his studies in physics and the other natural sciences much less so than his mathematical and philosophical work.

For these reasons, Descartes is often called the ‘father’ of modern philosophy.