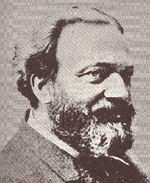 Richard Avenarius, a German philosopher, was born in Paris.

He taught in Zurich, where he became a professor in 1877.

He founded the epistemological theory of knowledge known as empiriocriticism, in many parts touching upon ERICH MACH’s views.

According to empiriocriticism, the major task of philosophy is to develop a “natural concept of the world” based on pure experience.

Avenarius gives a biological basis to its realization teachings.

Avenarius also analyzed the meaning of the economics principle for the mental life and recognizing.