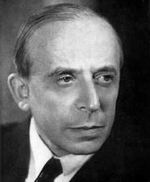 Richard von Mises, Austrian-born American mathematician, engineer, and positivist philosopher, was born in Lvov when it was under Austrian control and known as Lemberg. His father, Arthur Edler von Mises, worked for the Austrian State Railways as a technical expert and his mother was Adele von Landau.

Richard was the second son of the family, the elder son being Ludwig von Mises who went on to become as famous as Richard.

Ludwig, who was about eighteen months older than Richard, went on to become an economist who contributed to liberalism in economic theory and made his belief in consumer power an important part of that theory. Richard also had a younger brother, who died as an infant.

To start his career, he became a professor of Applied Mathematics at the University of Strassburg, Germany. Throughout his educational experiences and career, he believed in the logical reasoning of problems by using one’s past experiences. He used this idea in his experiences in flight mechanics, other teaching positions, and compiled numerous technical works, including his founding of the journal Zeitschrift für angewandte Mathematik und Mechanik.

Von Mises’s work in engineering helped him view applied mathematics as the essential link between theory and scientific observation. This lead von Mises to analyze the field of statistics which is related to probability. Not satisfied with the vague status of probability, he tried to formalize it. He started with Pierre Laplace’s definition of a probability event because he believed it worked with games of chance, but did not work in practical applications. In 1909, he created two axioms in which probability must be based upon. These are the axiom of convergence, “as a sequence of trials is extended, the proportion of favorable outcomes tends toward a definite mathematical limit” and the axiom of randomness, “the limiting value of the relative frequency must be the same for all possible infinite subsequences of trials chosen solely by a rule of place selection within the sequence (i.e., the outcomes must randomly distributed among the trials)”. He continued his work on the subject and wrote a book in 1928 entitled Probability, Statistics and Truth. He developed many aspects of modern probability theory and thoroughly explained its relationship to statistics.

In 1939, Von Mises first proposed what we know today as the birthday problem. He wondered, “How many people must be in a room before the probability that some share a birthday, ignoring the year and leap days, becomes at least 50 percent?” This is probably one of the most explored probability problems in classrooms today.