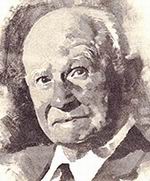 Roy Wood Sellars was born in Seaforth, Ontario, in 1880.

He is the second son of Ford Wylis and Mary Stalker Sellars, he had a notable, predominantly Scottish ancestry. The Sellars came originally from the Glasgow region of Scotland, migrating first to Nova Scotia and then to Upper Canada (Ontario). They married into the distinguished Wood family.

Roy entered the University of Michigan in 1899. He washed dishes for his board during his first year, and then, with his brother, cooked his own meals. He states that he was not well prepared for the university, yet his selection of courses threw him in with the class ahead of him. Still, he says, he “made a go of it,” so much so indeed that on graduation his class voted him one of the two most scholarly of its members. This opinion was evidently shared by Professor Wenley of the philosophy department, who recommended him for a fellowship at the University of Wisconsin, and then invited him back to teach at Michigan while he himself was on sabbatical leave.

In 1904 he was offered a teaching fellowship in philosophy at the University of Wisconsin.

Sellars discussed with Henri Bergson the possibility of a naturalistic emergent type of evolution. But Bergson referred him to the scientifically trained vitalist, Hans Driesch, with whom he then studied in Heidelberg. Sellars’ recollections of Driesch are not indicated in his records; but he did have personal discussions with him and there seems little doubt that Driesch pointed him to relevant specifics in physiology.

Sellars returned to teaching with a notable course in the philosophy of science.” We sometimes used Ward’s Naturalism and Agnosticism but also used Thomas Henry Huxley, Erich Mach, Jules Henry Poincare, and Pearson,” Sellars recalled. Many of his students were graduate students in physics, chemistry, and biology.

In 1911 he married his cousin, Helen Maud Stalker, an intelligent and beautiful woman who was a great helpmate until her death in 1962. In the early years of their marriage, Helen translated Bougle’s Evolution of Values for which Roy wrote a preface. In 1912 and I913 their two children were born: Wilfrid, who was to become a most eminent philosopher, and Cecily who became a minister’s wife and a psychologist.

His social concern gained force from the progressivism of LaFollette during Roy’s year in Wisconsin, and social philosophy became indeed the crowning or completion of his thinking.

In 1918 Sellars published The Next Step in Religion. The next step in religion was an outright humanism. According to Sellars, religious thought historically has been prescientic and hence mythopoetic. The time had arrived for a religion which comes to terms with the world disclosed through science. The universe of science shows no evidence of being deiform, but it does hold human values which should be cherished by both the individual and society; and it does present the option of living from the viewpoint of the whole and the long run, and this is what constitutes religion. Let men therefore live as citizens of a world to be made the most of.

In 1922, Sellars published his Evolutionary Naturalism. The major content of this book went back to his doctoral thesis. It was an epochal publication. Both Lloyd Morgan’s Emergent Evolution and Samuel Alexander’s first statement of emergent evolution were published a year later. Morgan added an appendix to his volume distinguishing his position from that of Sellars. “Mine,” said the latter, “was more systematically empirical and naturalistic.” There was no introduction or a mysterious nisus or or extra-natural control. Material organization was the key concept. Morgan told Sellars that to his knowlege, he (Sellers) was the first to publish on emergent evolution.

Sellars retired in 1950 from his teaching activities.

In 1954 a tragedy occurred in Sellars’s life. His daughter, Cecily, a state psychologist in North Dakota, was killed in an auto accident. The repercussion from this tragedy affected Sellars’s publications, though he remained an incessant scholarly writer. In his nineties, he was catching up with papers he had been working on at the time of the tragedy.

Notre Dame University has the distinction of providing a capstone to Sellars’s career. In September, 1970, the Notre Dame Philosophy Department honored Sellars’ ninetieth year with a symposium on his philosophy. The symposiasts included: Andrew J. Reck of Tulane, Wilfrid Sellars of Pittsburgh, and C. F. Delaney of Notre Dame. Having a son who is a philosopher with his own extension of his father’s philosophy is the greatest of capstones.

He was the originator of critical realism, an emergent evolutionist anteceding Lloyd Morgan and Samuel Alexander, a proponent of a double knowledge and identity theory of the brain-mind relationship, an original American writer on religious humanism and the drafter of the Humanist Manifesto,

Sellersâ€™ philosophy taken overall is a philosophy of the human scene in its cosmic context. He writes: “I see this little planet spinning in space and marvel at its history. This is not a story-book tale but one of struggle and tragedy and accomplishment. Stubbornness mixed with kindliness will achieve much but intelligence must be added. Out of these ingredients should come wisdom. Thus I triangulate and extrapolate. It is obvious that I am concerned with participative democracy in the masses, and with the growth of international institutions. Patriotism is not enough. There must be resolutions of conflicts. And this is made possible by some openness of mind and by some recognition that it is tactically wise to agree to disagree, and wait on time.”

– The Next Step in Religion (Philosophy in America)