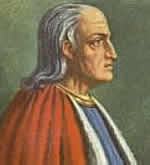 – God exists, for since whatever exists does so only through something, there must be a supremely great being that exists though itself and through which all other things exist.

– God freely became a human being because to secure man’s happiness (for which man was created) man had to be punished for his sin and no one but God could make such satisfaction: God became man in order to make the offering necessary for redemption.

Anselm was an Italian born, Benedictine English philosophical theologian. He is best known for his ontological argument for the existence of God, and the satisfaction theory of the Atonement.

His Monologion and Proslogion both deal extensively with his ontological proofs for God’s existence, and the hierarchical order of the universe.