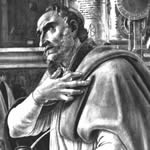 – Individual beings in the midlle empirical world have developed out of the primeval matter God created ex nihilo with the help of seminal powers implanted in it.

– Not only sin but also guilt has been transmitted from Adam as a consequence of the ‘Fall’ by way of concupiscence, which Christ alone has avoided.

– As a consequence of Adam’s sin, humankind was condemned, but God has chosen to predestine some to salvation as an act of grace while permitting others to be lost.

– The church on earth is a mixed body of saints and sinners outside of which there is no salvation.

Augustine was educated as a rhetorician in the former North African cities of Tagaste, Madaura, and Carthage. Between the ages of 15 and 30, he lived with a Carthaginian woman whose name is unknown; in 372 she bore him a son, whom he named Adeodatus, which is Latin for ‘the gift of God’.

Inspired by the philosophical treatise Hortensius, by the Roman orator and statesman Marcus Tullius Cicero, Augustine became an earnest seeker after truth. He considered becoming a Christian, but experimented with several philosophical systems before finally entering the church.

For nine years, from 373 until 382, he adhered to Manichaeism, a Persian dualistic philosophy then widely current in the Western Roman Empire. About 383 Augustine left Carthage for Rome, but a year later he went on to Milan as a teacher of rhetoric. There he came under the influence of the philosophy of Neoplatonism and also met the bishop of Milan, St. Ambrose, then the most distinguished ecclesiastic in Italy. Augustine presently was attracted again to Christianity.

He returned to North Africa and was ordained in 391. He became bishop of Hippo (now Annaba, Algeria) in 395, an office he held until his death.

Augustine’s doctrine stood between the extremes of Pelagianism and Manichaeism. Against Pelagian doctrine, he held that human spiritual disobedience had resulted in a state of sin that human nature was powerless to change. In his theology, men and women are saved by the gift of divine grace; against Manichaeism he vigorously defended the place of free will in cooperation with grace.

– Confessions
– The Trinity
– The City of God