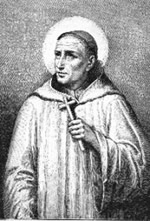 – There is a natural simplicity in the very substance of the soul; for the soul, it is the same to be as to live, but it is not the same thing to be as yo live well or to live happily; nevertheless the soul can ascend to this.

– The soul is simple, immortal, and free; these cannot be lost but can be covered over.

Saint Bernard of Clairvaux is one of the most ilustrious Christian teacher and representatives of monasticism in the Middle Ages.

He is considered a Saint by the Anglican and Roman Catholic churches. Catholics recognize him as a Doctor of the Church.

Saint Bernard of Clairvaux was the primary builder of the Cistercian order of monks.

He joined the small monastery of Citeaux when he was 22.

By the new constitution of the Cistercians Clairvaux became the chief monastery of the five branches into which the order was divided under the supreme direction of the abbot of Citeaux. Though nominally subject to Citeaux, Clairvaux soon became the most important Cistercian house, owing to the fame and influence of Bernard.

His power soon made him famous, and with the death of Pope Honorius II in 1130, he asserted the claims of Pope Innocent II against those of Anacletus II, and thus became the most influential supporter of his cause.

In 1146, he preached in favor of a second crusade at Easter 1146 in front of King Louis VII. However, the outcome of the crusade was not as he expected it to be.